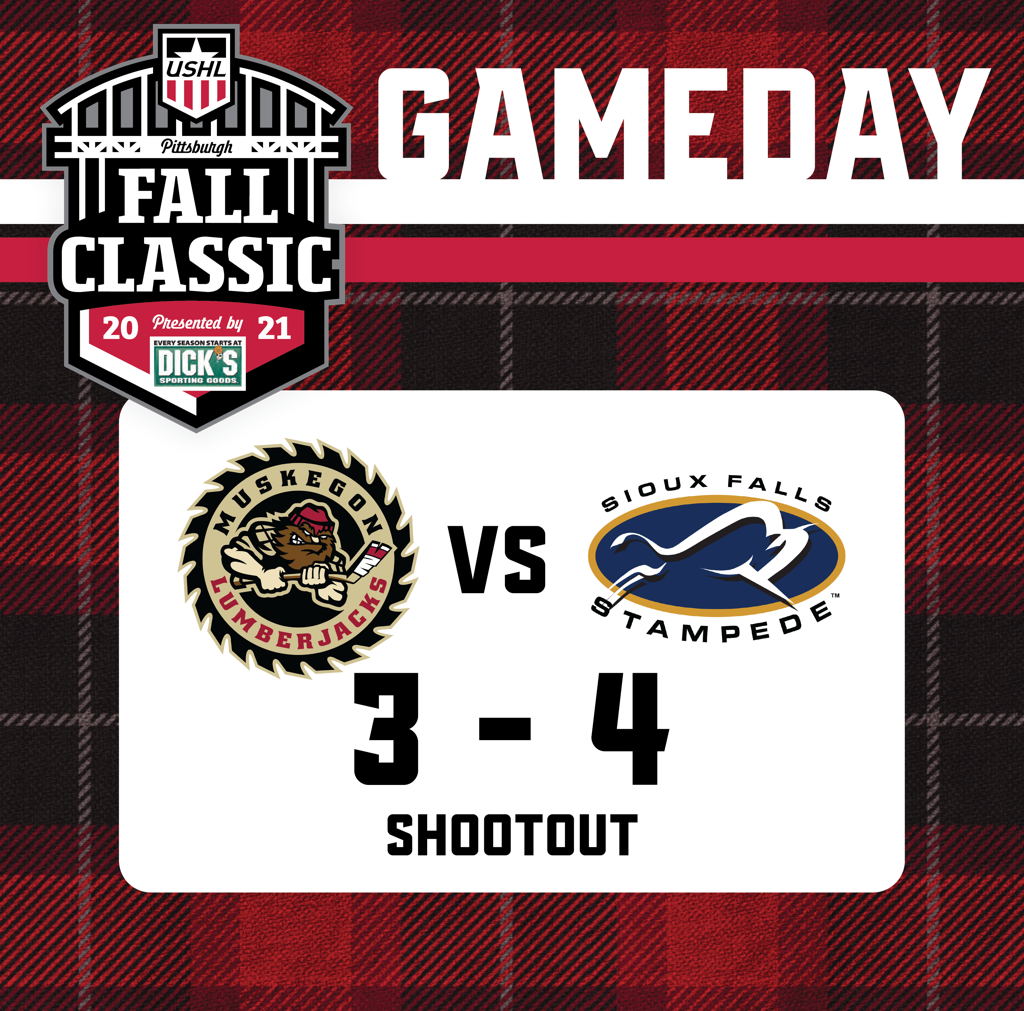 CRANBERRY TOWNSHIP, Pa. — The Muskegon Lumberjacks lost a tight match to the Sioux Falls Stampede, falling in a shootout by a score of 4-to-3 in the regular season opener in the 2021 USHL Fall Classic.

It didn’t take long for the Stampede to break the ice in Pittsburgh when Garrett Pinoniemi found the back of the net at 1:51 while Sioux Falls was on the power play. Ray Fust and Cal Thomas assisted on the goal.

Muskegon would score the equalizer at 7:03 of the first period when alternate captain Ben Strinden sashayed his way by the Stampede defense and tucked a nifty backhand shot past goaltender Isak Posch. Strinden’s tally was assisted by Ethan Whitcomb.

It was more of the same in the second period for both teams. At 4:59, Sioux Falls’ Brandon Chabrier snapped a seeing-eye wrist shot that beat Lumberjack goaltender Jan Skorpik. Fust scored the lone assist on the play.

The Lumberjacks would respond at 12:46 when newcomer Tyler Hotson found the puck in a net-front scramble and jammed it past Posch. Hotson’s marker was helped by Jake Richard and Jacob Guevin to tie the game at 2-to-2.

With under a minute to play in the middle frame, Chabrier would score his second lamplighter of the afternoon with his one-time knuckle puck that fooled Skorpik to make it a 3-to-2 score for Sioux Falls. Pinoniemi had the only helper on Charbrier’s goal at 19:14 of the second period.

In the third period, Strinden would add his second goal of the game at 15:22 with his one-timer in between the circles of the offensive zone. Tom Sinclair and Guevin added assists on the play to tie the game 3-to-3 in the third period.

Both teams skated to a 3-to-3 tie after regulation and needed overtime to settle it. However, neither team could find the twine in the 3-on-3 extra session, resulting in a shootout.

In the shootout, Muskegon’s Tyler Young and David Hymovitch could not score while Garrett Pinoniemi and Sam Harris did for Sioux Falls.

The Stampede would go on to win with a final score of 4-to-3.

In the end, Muskegon took a total of 29 shots with Stampede goalie Posch stopping 26 while Sioux Falls managed to put 27 pucks on Skorpik, who made 26 saves.

The Lumberjacks have a quick turnaround for their next game when they take on the Sioux City Musketeers on Sunday, Sept. 26. The game is scheduled for 12 pm at the UPMC Lemieux Complex to conclude the 2021 DICK’S Sporting Goods Fall Classic.

Flannel Fest rolls into Saturday! Night two will feature several exciting events for the whole family including hayrides, pumpkin and axe throwing, and much more! Later, during the game's first intermission, watch your favorite teachers dash for cash to benefit local classrooms as the Lumberjacks take on the Chicago Steel! Single-game tickets are now on sale. For more information, call the Muskegon Lumberjacks Business office at (231)-799-7000 or email afranczek@muskegonlumberjacks.com.