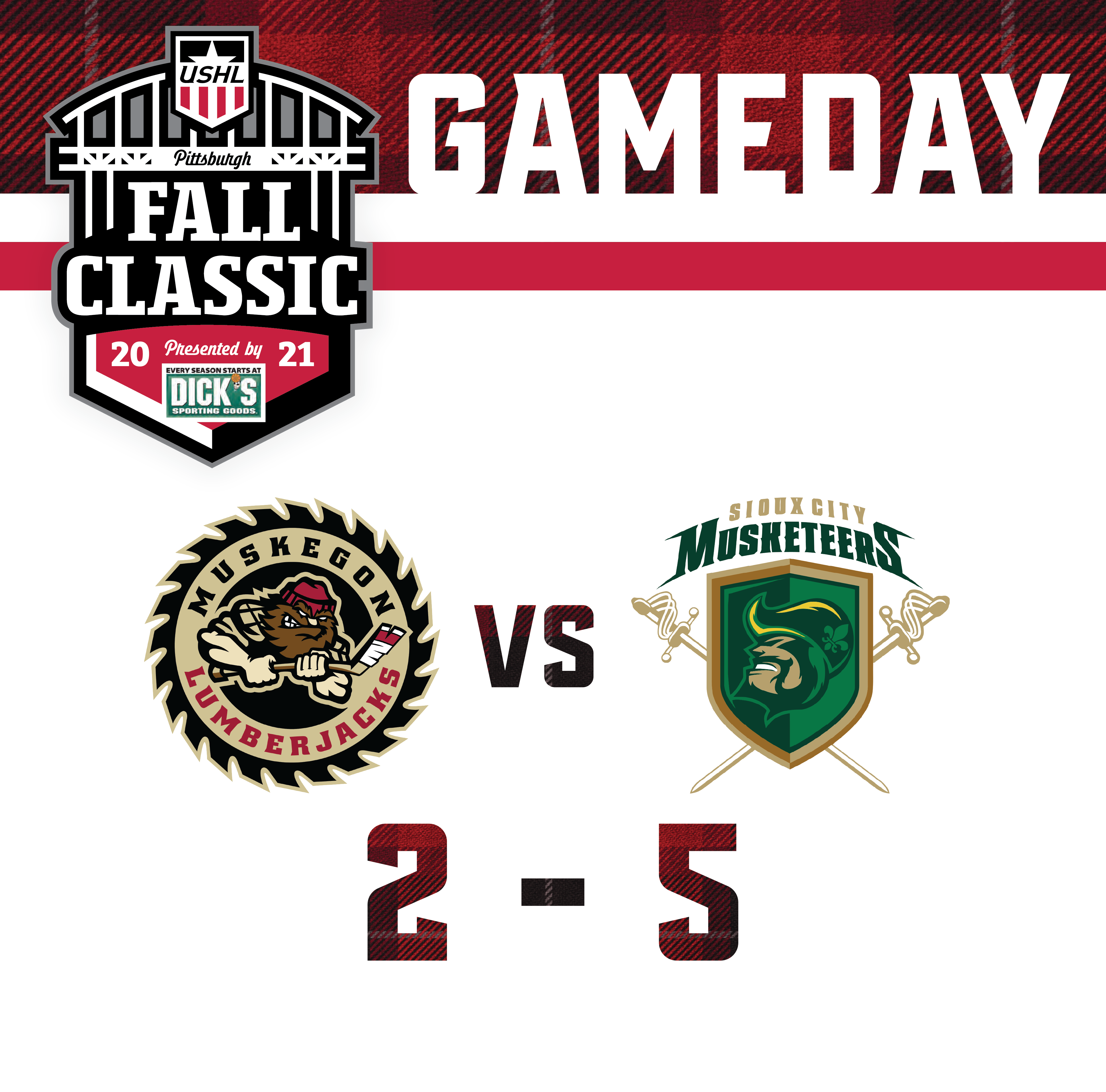 CRANBERRY TOWNSHIP, Pa. — The Muskegon Lumberjacks came up short against the Sioux City Musketeers on Sunday and ultimately dropped a 5-to-2 decision while concluding the 2021 USHL Fall Classic.

The Musketeers hit the ground running at 3:02 when Kirklan Irey found the puck in a net-front scramble and jammed it past Lumberjack goaltender Cameron Korpi for the 1-to-0 lead. Irey’s goal was assisted by Ralfs Bergmanis and Tomi Leppanen.

Sioux City would add another tally at 10:44 of the period to make it 2-to-0 after Ben Doran fired a loose puck off of a rebound from fellow Musketeer Tomi Leppanen’s original shot. Leppanen and Irey assisted on the play.

Muskegon would cut the deficit in half at 13:10 of the first period when Gavin McCarthy tipped in a pass from teammate Phil Tresca to make it a 2-to-1 game. Nathan McBrayer picked up the secondary assist on McCarthy’s first goal of the season.

Both teams played an even period, but it was Ben Steeves striking at 15:21 to push the Musketeer lead. Steeve’s goal was unassisted when it snuck past goaltender Korpi in the middle frame.

At the end of 40 minutes of action, Sioux City took a 3-to-1 lead into the intermission.

In the third period, Steeves would pot his second goal of the game, increasing the Musketeer lead to 4-to-1 at 1:29 of the period. Irey and Garrett Brown picked up assists on the goal.

But the Lumberjacks would fight their way back to a two-goal deficit at 4:21 of the period when Tom Sinclair drove the net and punched home a loose puck behind Musketeer goaltender Axel Mangbo. Sinclair’s goal was unassisted to make it a 4-to-2 game.

However, Sioux City would restore the three-goal lead when Irey netted his second goal of the game, widening the Musketeer lead to 5-to-2. Grant Slukynsky managed to get the only assist on Irey’s goal at 6:06 of the third period.

The Musketeers would go on to win with a final score of 5-to-2.

In the end, Muskegon took a total of 29 shots with Musketeer goalie Mangbo stopping 27 while Sioux City managed to put 32 pucks on Korpi, who made 27 saves.

The Lumberjacks will be back in action next week when they travel to Geneva, Ill. for a single-game matchup with the defending Clark Cup champion Chicago Steel. The lone game is scheduled for Saturday, Oct. 2 with puck drop slated for 8:05 pm ET.