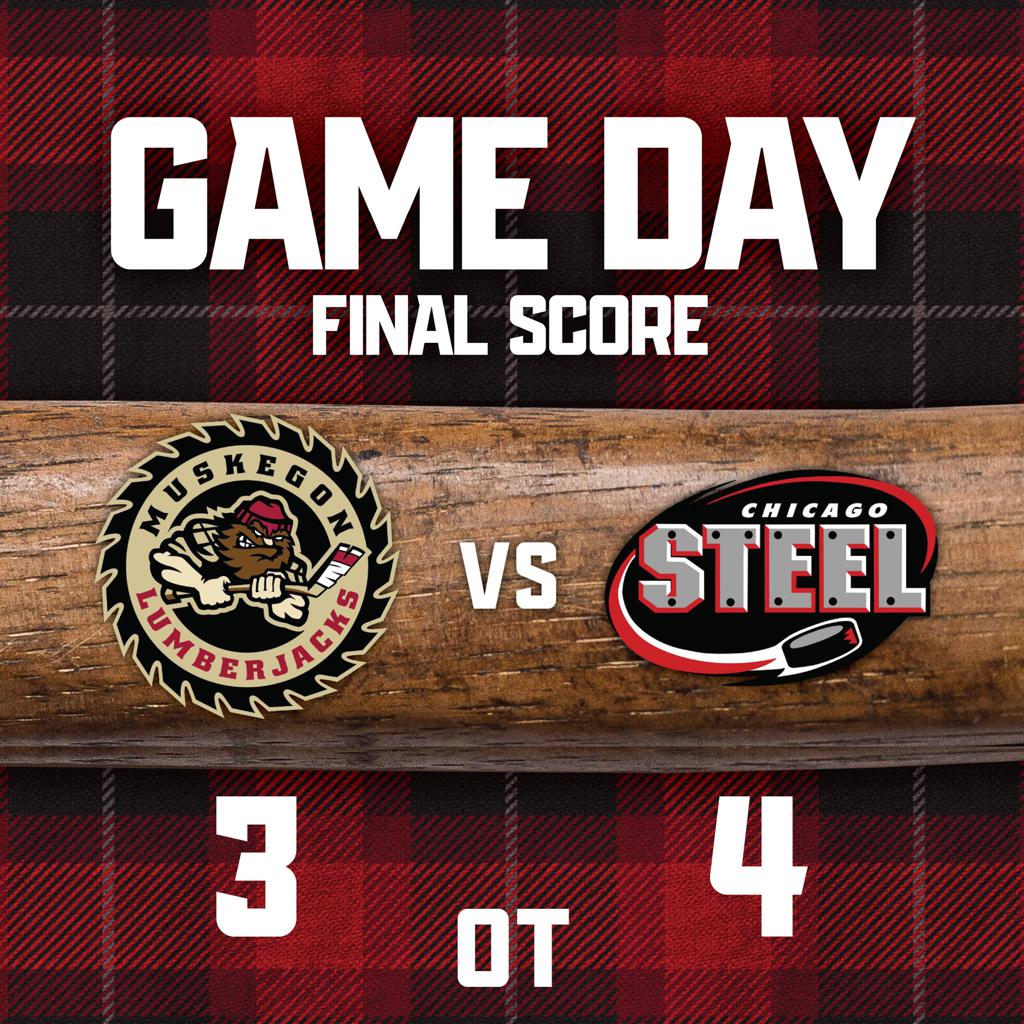 GENEVA, Ill. — The Muskegon Lumberjacks fell to the defending Clark Cup champions on Saturday night, losing in overtime by a score of 4-to-3 to the Chicago Steel. After Chicago unveiled their championship banners in front of their home crowd, they witnessed the Steel comeback from two goals down, force overtime, and eventually pocket the extra point in the standings.

It didn’t take long for Muskegon to silence Chicago’s home crowd in the opening frame. Tyler Dunbar managed to squeak a puck past Chicago netminder Nick Haas just 68 seconds into the first period to give the Lumberjacks the 1-to-0 lead. Dunbar’s goal was unassisted.

Both teams played a pretty even second period, each receiving two power plays. However, neither team could find the back of the net, keeping the Lumberjack lead at 1-to-0 at the end of 40 minutes of action.

In the final period of regulation, it was more of the same from each team. However, at 6:39 of the third period, Phil Tresca tipped in a shot while the Jacks were on the power play. Jacob Guevin and Joey Larson each picked up an assist Tresca’s power play goal to make it a 2-to-0 lead.

But the Steel would respond just 52 seconds later, with Jayden Perron tucking a loose puck behind Lumberjack goalie Jan Skorpik. Perron’s power play goal was unassisted at 7:31 of the third to cut the Steel deficit in half.

Chicago would pull even at 16:38 of the third when Sam Lipkin redirected a shot past Skorpik. Jackson Blake and Anthony Dowd picked up helpers to tie the game 2-to-2.

But just over a minute later, Muskegon’s Joey Larson broke the tie with his wrister to put the Lumberjacks back in front 3-to-2 in the third. Larson’s tally was assisted by Ben Strinden at 17:53 of the period.

With the goalie pulled for the extra attacker, Chicago would score the game-tying goal from Blake with just 52 seconds remaining in regulation. Adam Fantilli and Jake Livanavage assisted Blake’s goal to send the game to overtime.

With the game tied 3-to-3 after 60 minutes, each team picked up one point in the league standings. However, Chicago would complete the comeback when Adam Fantilli broke through the Muskegon defense and scored the overtime game-winner. Luca Fantilli and Perron picked up assists on Fantilli’s goal at 3:02 of overtime.

In the end, the Chicago Steel stole the extra standings point and are now in sole possession of first place in the Eastern Conference. Muskegon, meanwhile, is in a three-way tie for sixth place.

The Lumberjacks will be back in action next week when they battle in-state rival USNTDP U18 on Saturday, Oct. 9. Puck drop slated for 7:10 pm ET from USA Hockey Arena in Plymouth.

The Muskegon Lumberjacks are proud and dedicated members of the United States Hockey League (USHL), the nation’s only Tier I junior hockey league and leading producer of NCAA players and National Hockey League draft picks in the United States. The club’s goal is to create an environment where student-athletes develop into successful young men both on and off the ice, which includes playing the game the right way while keeping up with their studies in the classroom and staying actively involved in the West Michigan community. The organization is committed to providing quality, affordable, and top-notch family entertainment while providing positive role models for the youth for the local community