RECAP - Muskegon outmatched in 8-3 loss to USNTDP U18 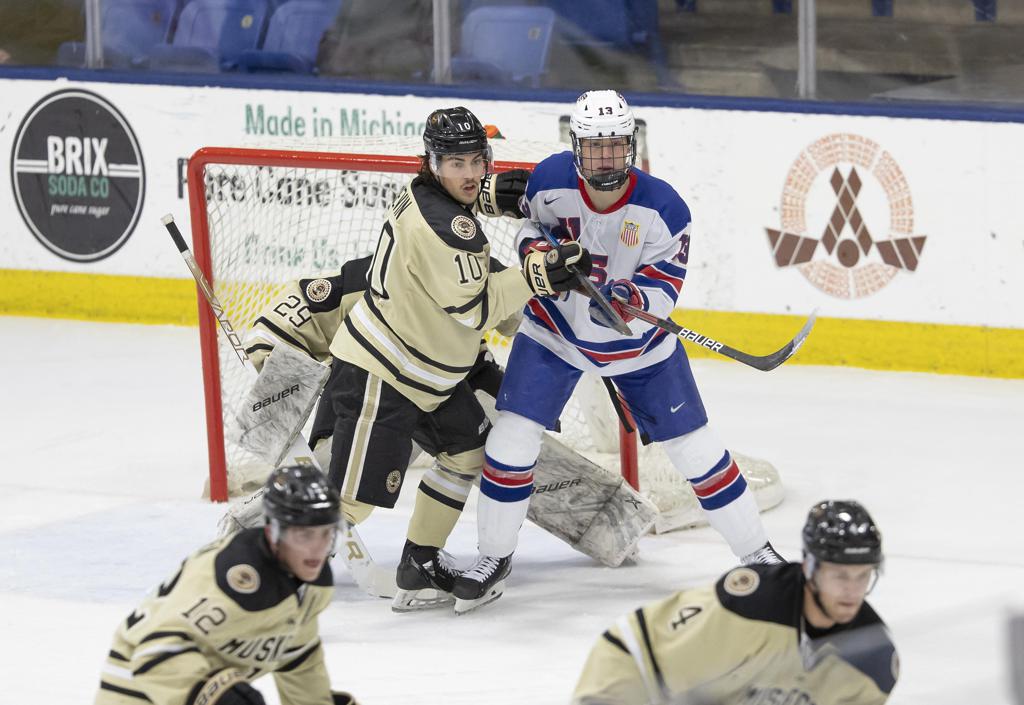 PLYMOUTH, Mich. — The Muskegon Lumberjacks fell to the United States National Development Program (USNTDP) U18 team on Saturday, Oct. 9 with a final score of 8-to-3. Despite outshooting the U18’s and winning the special teams battle, the Lumberjacks were unable to secure their first win of the 2021-22 regular season, now falling to a record 0-2-1-1 through four games.

The USNTDP gave their fans something to cheer about in the first 20 minutes of action when Logan Cooley scored five-hole on Lumberjack starting goalie Cameron Korpi. Cooley’s goal at 12:53 of the first was unassisted to make it 1-to-0 USNTDP.

The USNTDP lead was increased when Rutger McGroarty deked his way through the Muskegon defense and tucked in a nifty backhander past Korpi at 14:09 of the period. Cooley and Charlie Leddy picked up helpers on the play to double the lead to 2-to-0 USNTDP.

After one period of action, USNTDP took the 2-to-0 lead into the dressing room for the first intermission.

The U18’s picked up right where they left off in the middle period when Devin Kaplan scored at 2:19 of the period. Kaplan’s second goal of the season was assisted by Frank Nazar to increase the USNTDP lead to 3-to-0.

But Muskegon would cut the deficit when Quinn Hutson sniped top shelf on U18 goalie Tyler Muszelik while on the power play. Hutson’s first goal of the season was assisted by Jacob Guevin at 9:24 of the period to put the Lumberjacks on the board.

But the momentum quickly swung back the other direction at 15:24 when Cruz Lucius restored the three-goal lead for USNTDP. Lucius’s goal was set up by Cooley and Lane Hutson.

Team USA didn’t stop there, as Marek Hejduk, son of former NHL’er Milan, picked up a loose rebound and fired it to the back of the net and give the U18’s a 5-to-1 lead. Hejduk’s goal was unassisted at 16:17 of the second period.

With just over a minute left, U18’s Brady Berard redirected a puck from teammate Maddox Flemming to push the USA lead at 19:12 of the second frame.

In the final period, the Lumberjacks swapped out starting goalie Korpi for newly added netminder Carson Limesand to begin the period. While on the power play, defenseman Tyler Dunbar scored in back-to-back games for Muskegon 1:54 into the final stanza. Dunbar’s lamplighter was assisted by newcomer Jake Braccini to cut the lead to 6-to-2, still in favor of USNTDP.

But the U18’s would respond at 11:27 with Cooley potting his second goal of the game, padding the USA lead once again. Lucius and McGroarty would pick up the assists on Cooley’s fourth point of the night.

At 17:09, Muskegon’s Owen Mehlenbacher notched his first goal of the season with a sneaky wraparound that beat goaltender Muszelik. Charlie Strobel scooped up the lone assist on Mehlenbacker’s tally.

Alas, with under a minute to play in regulation, the U18’s would add one more on the power play, courtesy of Kaden Muir. Seamus Powell and Hejduk managed to get assists on Muir’s goal at 19:32 of the final frame.

In the end, the USNTDP U18 team trounced the Lumberjacks by a final score of 8-to-3.

Despite dropping an 8-to-3 decision on the scoreboard, Muskegon outshot the U18’s 35-to-32 through 60 minutes. Also, the Lumberjacks won the special teams battle, going 2-for-3 on the power play and 2-for-4 on the penalty kill, respectively.

Defenseman Tyler Dunbar scores in back-to-back games, with Owen Mehlenbacher and Quinn Hutson each seeing the score sheet for the first time this season.

Cameron Korpi started the game and allowed six goals on 24 shots, making 18 saves. Korpi played the first two periods before being pulled for the entire third period. Carson Limesand, who appeared in nine games with the NAHL’s Northeast Generals, came on in relief of Korpi for the third period, allowing two goals on 8 shots, making six saves.

Muskegon falls to 0-2-1-1 on the season, desperately searching for their first win of the regular season. Currently, the Lumberjacks sit in eighth place in the Eastern Conference standings.

Home opening weekend is finally here! The Lumberjacks will be back in action next weekend when they host the Chicago Steel on Friday, Oct. 15, and Saturday. Oct. 16. Puck drop slated for 7:10 pm ET both nights from Mercy Health Arena in downtown Muskegon.

Come down to the first night of Flannel Fest and rock out with the AC/DC cover band “Let There Be Rock.” Plus, the first 100 adults to open an account with Family Financial Credit Union during Flannel Fest will become the proud owners of an exclusive white Lumberjacks jersey. You do NOT want to miss out on the biggest party of the Fall!

Recap - Muskegon Outmatched in 8-3 Loss to USNTDP U18