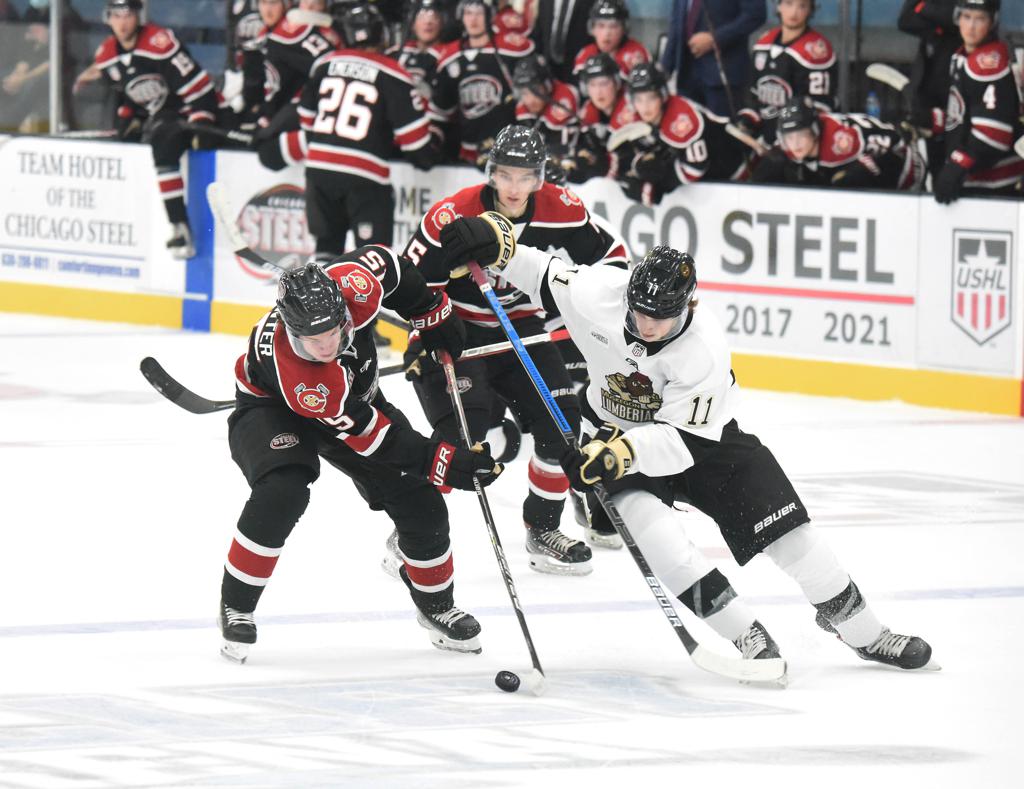 MUSKEGON, Mich. — The Muskegon Lumberjacks will open their doors to Mercy Health Arena to all fans for the first time in 595 days when the team faces off against the Chicago Steel for home-opening weekend on Friday and Saturday, Oct. 15 and 16 respectively. Both games will start at 7:10 pm ET and will coincide with Flannel Fest, a weekend-long event with live music, axe throwing, hayrides, a cornhole tournament, and much more.

The Steel sit atop the Eastern Conference standings with a record of 5-0-1-0, with their lone overtime loss coming from the hands of the Madison Capitols. Forward Jackson Blake, a 2021 fourth-round draft pick of the Carolina Hurricanes leads the entire USHL in points with 11 while forward Adam Fantilli is second in the league in goals with nine. Both of those players played crucial roles the last time Muskegon saw the Steel, losing 4-to-3 in overtime on Oct. 2 at Fox Valley Ice Arena, courtesy of Blake’s game-tying goal with under one minute to play in regulation and Fantilli’s overtime game-winner to steal the extra standings point.

The Lumberjacks endured their second consecutive unusual one-game weekend when they crossed to the eastern side of Michigan to battle the United States National Development Program (USNTDP) U18 team. Ultimately, the Jacks fell 8-to-3 in last Saturday’s game, but special teams seemed to be a strength for the team. Muskegon’s power play was 2-for-3, moving them up to having the fourth-best power play in the USHL, operating at 27.3 percent. Both power play goals came from forward Quinn Hutson, who notched his first goal of the young season, and Tyler Dunbar, who has lit the lamp in back-to-back games, respectively. University of Wisconsin commit Owen Mehlenbacher also found the twine for the first time this season with newcomer Jake Braccini collecting his first point as a Lumberjack.

Grab your flannel and join the Lumberjacks for a two-day street party on Western Avenue in booming downtown Muskegon. Friday’s night of festivities include axe throwing and live music from the AC/DC tribute band, "Let There be Rock.” Plus, the first 100 adults to open an account with Family Financial Credit Union during Flannel Fest will become the proud owners of an exclusive white Lumberjacks jersey.

Flannel Fest continues into Saturday starting with a cornhole tournament at 11 am, with registstration starting at 10 am on site. Night two will also feature several exciting events for the whole family including fall craft vendors, hayrides, axe throwing, with Gunnar & The Grizzly Boys providing live music starting at 5 pm! Later, during the game's first intermission, watch your favorite teachers dash for cash to benefit local classrooms! Single-game tickets are still available. For more information, call the Muskegon Lumberjacks Business office at (231)-799-7000 or email afranczek@muskegonlumberjacks.com.

The Jacks boast an NHL draft pick to the roster with defenseman Noah Ellis. Committed to play at the University of Massachusetts, Ellis was selected by the Vegas Golden Knights No. 184 overall in the sixth round of the 2020 NHL Draft. The Urbandale, Iowa native appeared in 40 games with the USHL’s Des Moines Buccaneers during the 2020-21 season, totaling five goals and 12 assists for 17 points.