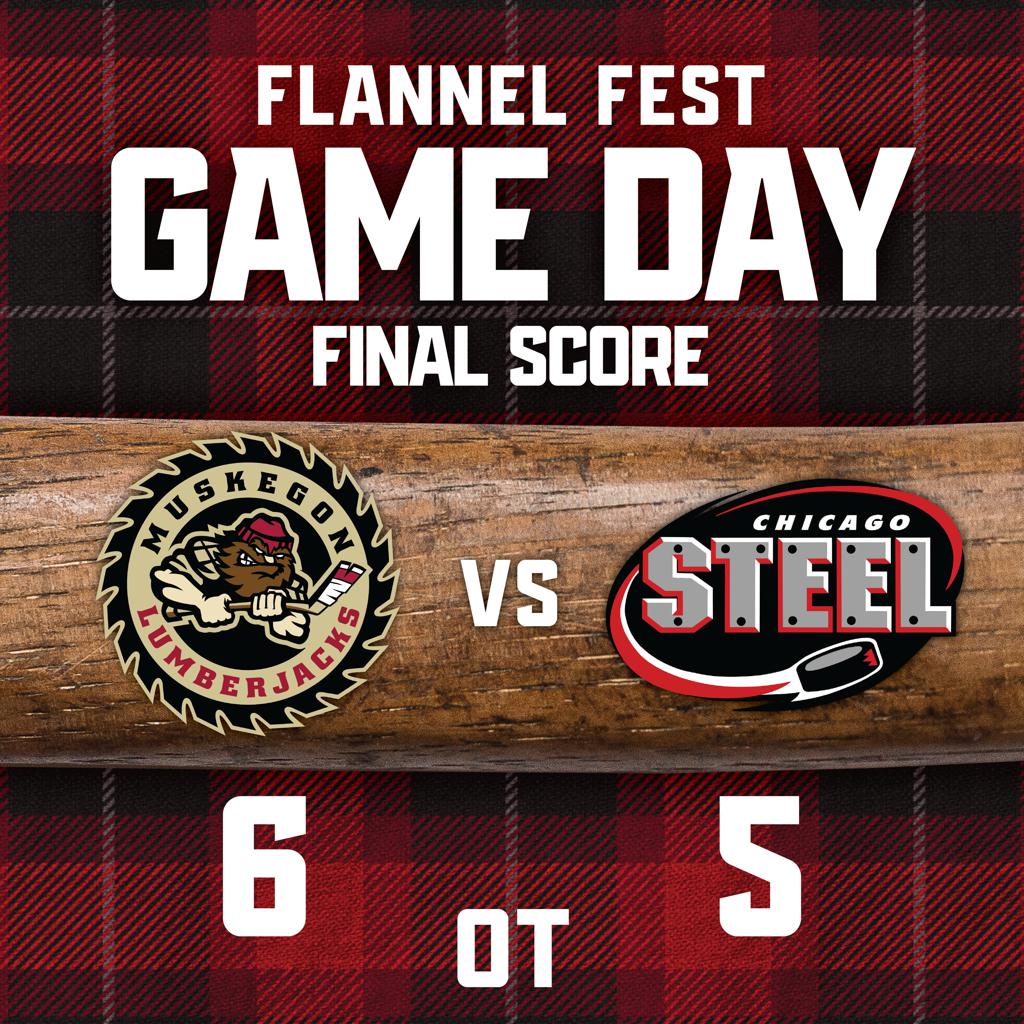 MUSKEGON, Mich. — The Muskegon Lumberjacks earned their first win of the season after knocking off the defending Clark Cup Champion Chicago Steel by a final score of 6-to-5 in overtime. Forward Joey Larson scored his first career hat trick while Quinn Hutson netted two goals, including the overtime game-winner as the Lumberjacks celebrated Flannel Fest for home-opening weekend.

It didn’t take too long for the defending champs to get on the board with league-leading scorer Jackson Blake lighting the lamp just 48 seconds into the first period. Blake’s fifth goal of the season was assisted by Adam Fantilli and Austen May to give the visitors the 1-to-0 lead.

The Lumberjacks would respond 45 seconds later when forward Joey Larson hit the twine at 1:33 of the period to tie the game at one. Larson’s goal was assisted by Jack Williams and Phil Tresca.

At 11:21 of the first, defensman Jacob Guevin would give Muskegon the lead with his first goal of the season. Jacob Napier and Tyler Young picked up assists on the play.

However, the lead was not to last for Muskegon as Chicago’s Harvey tied the game at 14:54 of the period. Fantilli and Blake helped on Harvey’s third of the season.

The Steel’s Zam Plante would break the tie at 3:44 to give Chicago the 3-to-2 lead. Plante’s marker was assisted by Michael Emerson and Luca Fantilli.

But it was Muskegon’s Quinn Hutson who would even the score with the Lumberjacks on the power play. Hutson’s second goal of the season was assisted by Tresca at 5:07 of the second period.

Chicago would restore the lead after Sam Lipkin potted a power play goal at 10:04 of the second period. Lipkin’s fourth goal of the year was assisted by Andon Cerbone and Jake Livanavage.

After two periods of play, the Chicago Steel took a 4-to-3 lead into the dressing room for the second intermission.

Twenty-seven seconds into the final frame of regulation, Harvey would give the Steel their biggest lead of the night. Muskegon starting goaltender Jan Skorpik was pulled and was replaced by Carson Limesand.

Alas, the Jacks would mount the comeback, courtesy of back-to-back goals from Joey Larson. Larson’s first tally was assisted by Tresca and Tyler Dunbar at 57 seconds to cut the deficit to one. Then, Larson completed the hat trick at 6:50 of the third to tie the game 5-to-5 and was assisted by Guevin and Tyler Hotson.

With both teams tied after 60 minutes of regulation, they headed to sudden-death overtime.

It only took 44 seconds for Hutson to score top-shelf on Steel goalie Gibson Homer to give Muskegon their first win on the season. Hutson’s game winner was assisted by Noah Ellis.

With the win, Muskegon captures two points in the Eastern Conference standings while simultaneously giving the team their first win of the season.

Forward Joey Larson recorded his first career hat trick to help his team surmount the comeback for his team to win in overtime.

Forward Quinn Hutson scores in back-to-back games, and now has three goals on the young season.