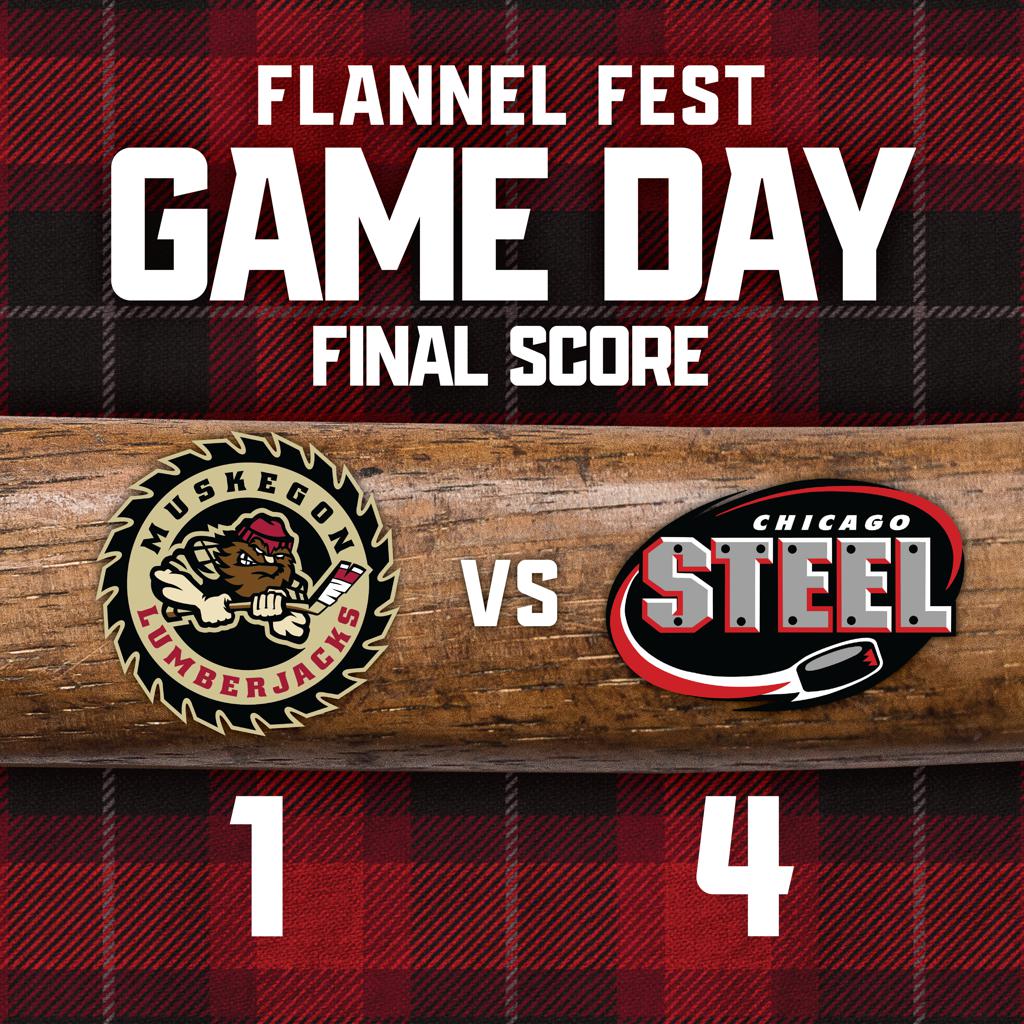 MUSKEGON, Mich. — The Muskegon Lumberjacks played a well-fought effort against the Chicago Steel, but ran out of gas at the finish line and ultimately fell 4-to-1 to close out home-opening weekend and Flannel Fest. Muskegon’s Tyler Hotson scored the lone Lumberjack goal while Carson Limesand recorded his first career USHL start in between the pipes.

A completely different start from last night’s game, it took 17 minutes and 14 seconds for Muskegon to get on the board. Froward Tyler Hotson redirected a point shot from defenseman Anthony Cliché to give the Lumberjacks the 1-to-0 lead in the opening period. Jacob Guevin picked up the secondary assist on Hotson’s second goal of the season.

At the end of 20 minutes, Muskegon took a 1-to-0 lead into the first intermission.

It was another tight period for both sides in the middle frame, but Chicago was finally able to put a crooked number on their scoreboard with a power play goal from Jack Harvey at 7:37 of the second period. Harvey’s third marker on the weekend, and fifth goal of the season, was helped by Jayden Perron and Adam Fantilli.

After two periods of action, Chicago and Muskegon were tied 1-to-1 on the scoreboard.

At 5:24 of the third period, Chicago’s Anthony Dowd fired a wrist shot past Limesand while his team was on the power play. Dowd’s second goal of the year was assisted by Jake Livanavage and Sam Lipkin to give the Steel a 2-to-1 lead in the final frame.

And Chicago would add one more goal to their column when Sam Lipkin lit the lamp at 9:02 of the third period. Andon Cerbone and Joe Miller helped on Lipkin’s goal to increase the Chicago lead to 3-to-1.

Finally, Jackson Blake from the Steel sealed the deal with an empty-net goal with just over a minute to play in regulation. Blake’s sixth goal of the season was unassisted.

In the end, the Chicago Steel walked away with a weekend split, banking three points on the weekend while Muskegon comes away with only two points, courtesy of last night’s overtime win.

The Lumberjacks will jump Lake Michigan to Wisconsin next weekend for a two-game series against the Madison Capitols on Friday, October 22, and Saturday, Oct. 23, respectively. Both games will start at 8:05 pm ET from Bob Suter’s Capitol Ice Arena from America’s Dairyland.