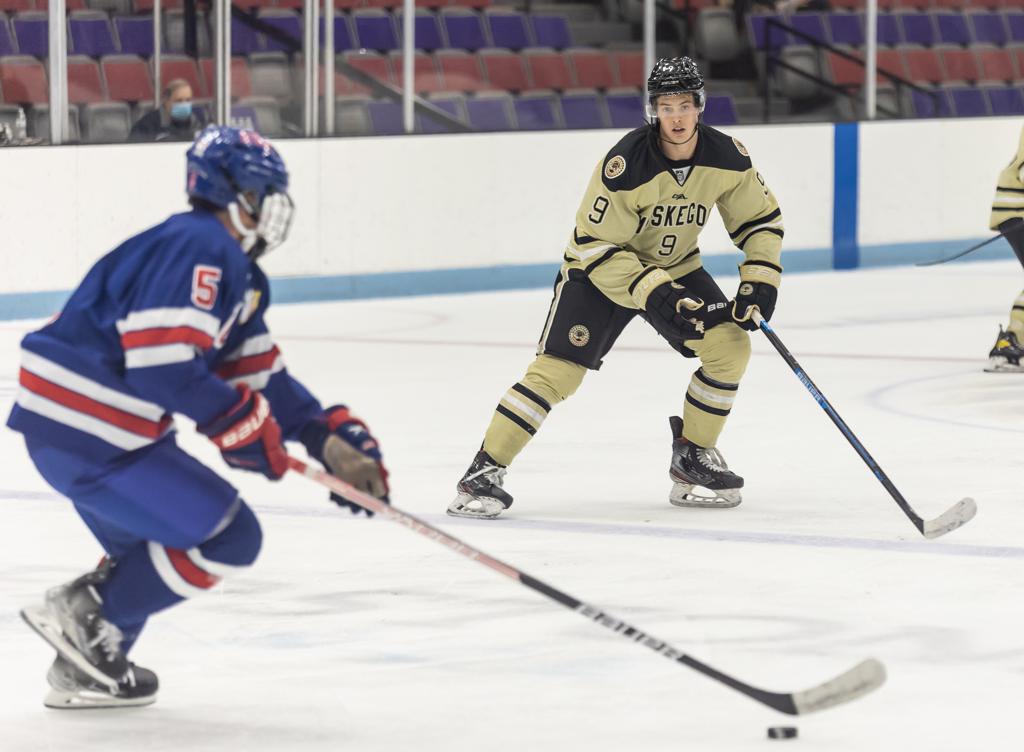 MUSKEGON, Mich. — The Muskegon Lumberjacks will hop across Lake Michigan to America’s Dairyland for a two-game weekend series against the Madison Capitols on Oct. 22 and 23, respectively. Both games will start at 8:05 pm EST from Bob Suter’s Capitol Ice Arena, situated on the outskirts of Wisconsin’s capital city. This series will mark the first time Muskegon has played against Madison since Feb. 8, 2020, as the Capitols opted out of the 2020-21 season due to the coronavirus pandemic.

The Capitols sit three points behind the Chicago Steel in the standings, good for second place in the Eastern Conference with 11 points. Madison is currently riding a five-game winning streak dating back to the beginning of October. The Caps swept the United States National Development Program (USNTDP) U17 team, beating them 8-to-6 in the first contest and routing Team USA 6-to-0 in game two. The Capitols boast a two-headed monster in the likes of Jack Musa and Kyle Kukkonen, both forwards. Musa, a Mirimar Lakes, Fla. native, has appeared in all seven games with the Capitols, totaling three goals and five assists for eight points. The Boston University commit has a seven-game point streak, averaging 1.14 points per game. Kukkonen, a Maple Grove, Minn. native, also has eight points through seven games, scoring two goals and six assists. The Michigan Tech commit was selected by the Anaheim Ducks in the sixth round, No. 162 overall in the 2021 NHL Entry Draft. In goal, Simon Latkoczy returned to Madison for his second stint after winning the Clark Cup with the Steel last season. This year, Latkoczy is undefeated with a 4-0-0 record with a 1.99 GAA and a .931 save percentage.

The Lumberjacks managed to earn their first win of the season, knocking off the defending Clark Cup champs Chicago Steel 6-to-5 in overtime. Forward Joey Larson netted his first career hat trick, and Quinn Hutson potted a pair of goals for Muskegon’s home opener, including the game-winner in overtime. Saturday’s game was another tight battle, but ultimately the Jacks ran out of gas and fell 4-to-1 to the Steel, with the only goal coming from Tyler Hotson. Defenseman Jacob Guevin continues to lead his team in points with seven after scoring one goal and two assists on the weekend, and Larson is now the sole leader in goals with five after his hat trick on Friday. In the end, Muskegon was able to pocket two out of a possible four points last week, climbing to seventh place in the Eastern Conference standings.

Forward Joey Larson lit the lamp three times in Friday’s 6-to-5 overtime win over the Chicago Steel. The Brighton, Mich. native now leads the team in goals with five and has put up one assist for six points. Larson is committed to Northern Michigan University from the revamped Central Collegiate Hockey Association (CCHA).

On Tuesday, Oct. 19, National Hockey League (NHL) Central Scouting released their preliminary watch list for the upcoming 2022 NHL Entry Draft. In all, six current and three future Jacks made the list. Current Lumberjacks include defensemen Tyler Dunbar, Jacob Guevin, and Jeremiah Slavin; forwards Owen Mehlenbacher and Ethan Whitcomb; and goaltender Cameron Korpi. In addition to the original six, three affiliates were named to the watch list, those being Michael Callow, Matthew Morden, and George Fegaras. The Lumberjacks also boast 12 players eligible to be selected in this year's NHL Entry Draft which will take place from July 7 through July 9 at the Bell Centre in Montreal, Quebec.

The Jacks boast an NHL draft pick to the roster with defenseman Noah Ellis. Committed to play at the University of Massachusetts at Amherst, Ellis was selected by the Vegas Golden Knights No. 184 overall in the sixth round of the 2020 NHL Draft. The Urbandale, Iowa native appeared in 40 games with the USHL’s Des Moines Buccaneers during the fi2020-21 season, totaling five goals and 12 assists for 17 points.

A classic rivalry comes to Muskegon for a good cause on Friday, Oct. 29, when Muskegon hosts the Dubuque Fighting Saints. Both Spartan and Wolverine fans are encouraged to support local charities, which will benefit Muskegon Rescue Mission and Love in Action. To make it enjoyable, it’s turning into a competition: which fanbase can donate more? Will it be MSU or U of M? Pianist Billy Ryan will be in the house to fire up both fan bases with performances of each fight song. Those who donate will be eligible for ticket upgrades. The fun will continue into Saturday, Oct. 30, when the Lumberjacks celebrate Halloween with Comic-Con night! This spooky night will include trick or treating on the concourse and your favorite characters! Grand Rapids Comic-Con will be on the concourse. Call the Muskegon Lumberjacks Business office at (231)-799-7000 or email afranczek@muskegonlumberjacks.com.