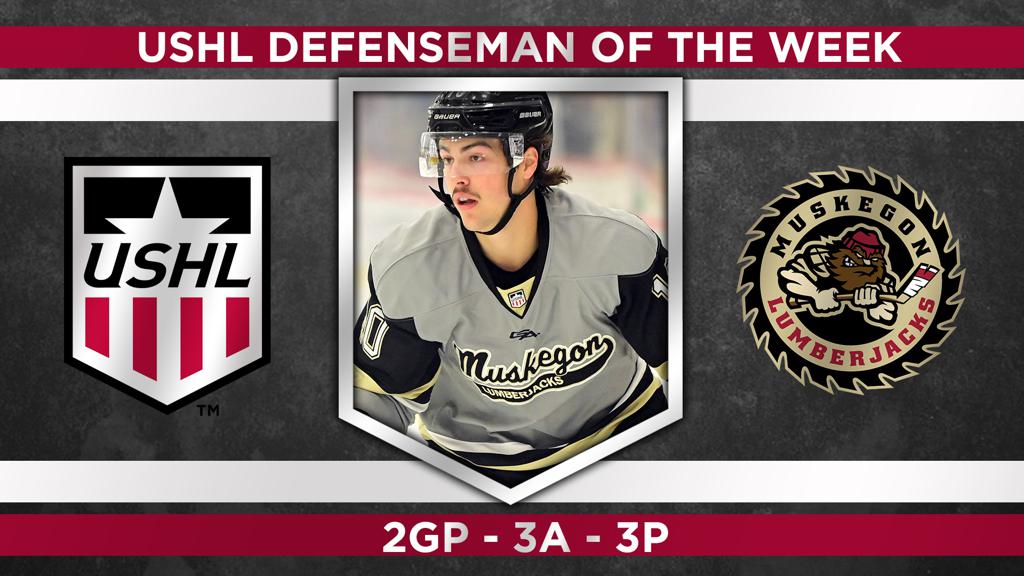 MUSKEGON, Mich. —  Muskegon Lumberjacks defenseman Jacob Guevin has been named USHL defenseman of the week for Week 6 of the 2021-22 USHL regular season.

After finding himself named Defenseman of the Week twice last season, Lumberjacks blueliner Jacob Guevin earned his first Weekly Honor of the 2021-22 season after extending his point streak to eight games with a trio of assists in a hard-fought weekend sweep at the hands of the Fighting Saints. Guevin started the weekend with pair of assists (0-2-2) in Friday night’s 7-4 loss.

The next night, Guevin picked up his 12th assist of the campaign with a primary marker on Muskegon’s second goal of the middle frame to extend the Lumberjacks lead to 3-1. The University of Nebraska-Omaha commit currently has 13 points (1-12-13) through the first 10 games of the season after finishing last season with 45 points (7-38-45) in 53 games, which earned Guevin a place on the First Team USHL All-Rookie roster. Guevin’s current eight-game point streak is the longest of his USHL career, surpassing a five-game stretch late last season. Dating back to March 31, 2021, Guevin has registered at least one point in 16 of his team’s last 20 regular season games.

Come hang out with the Zooperstars for Friday’s game! This one-of-a-kind show stars Whale Gretzky, Bobby Orrangutang, Mario Lemule, Squidney Crosby, and many more! Combining dancing, acrobatics, tricks and comedy, the Zooperstars offer fun for fans of all ages. On Saturday, the Jacks pay tribute to those brave men and women who have served, or currently serve in the United States Armed Forces for Military Night. For more information, call the Muskegon Lumberjacks Business office at (231)-799-7000 or email afranczek@muskegonlumberjacks.com.