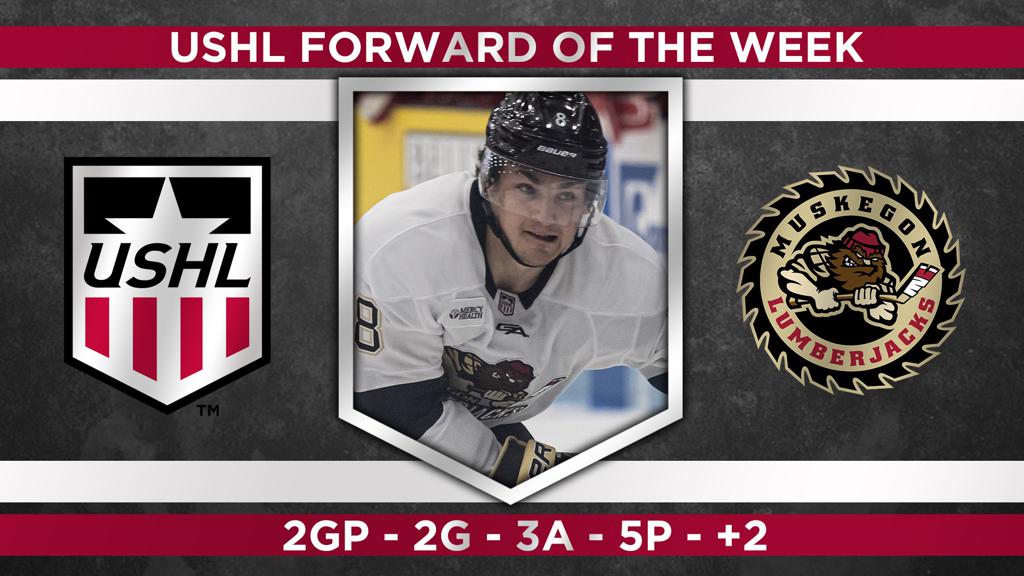 MUSKEGON, Mich. —  Muskegon Lumberjacks forward Jake Braccini has been named USHL Forward of the Week for Week 9 of the 2021-22 USHL regular season.

With a high-scoring, five-point weekend, Braccini doubled his point total this season en route to picking up his first USHL Forward of the Week award in his USHL career. The Hanover, Min. native recorded a pair of assists Friday night in an eventual 7-5 win over the Dubuque Fighting Saints. The next night, Braccini picked up his third assist of the weekend before scoring a pair of goals in the second period of a 6-3 win. Braccini’s five-point weekend (2-3-5) doubled his point total this season to 10 points (5-5-10) through 14 combined games with the Lumberjacks and Fargo Force. The second-year forward was acquired by the Lumberjacks after two games with the Force this season after a combined 56 games with Fargo where he picked up 28 points (13-15-28). Braccini’s three-point Saturday night (2-1-3) was the first three-point night of his career and the multiple-point games on both Friday and Saturday night were the second and third of his career.

Braccini becomes the second Lumberjack this season to win a weekly award after defenseman Jacob Guevin was tabbed USHL Defenseman of the Week after his stellar performance in Week 6.

On Friday, Nov. 26, rock your favorite flannel and show your Lumberjack Pride because it’s time to FLANNEL OUT at  Mercy Health Arena for Flaunt Your Flannel! The following night on Saturday, Nov. 27, it’s time to throw on your bell bottoms and jumpsuits! Mercy Health Arena is transforming into the disco as we get our boogie on to some groovy throwbacks! It’s Saturday Night Fever baby! For more information, call the Muskegon Lumberjacks Business office at (231)-799-7000 or email afranczek@muskegonlumberjacks.com.