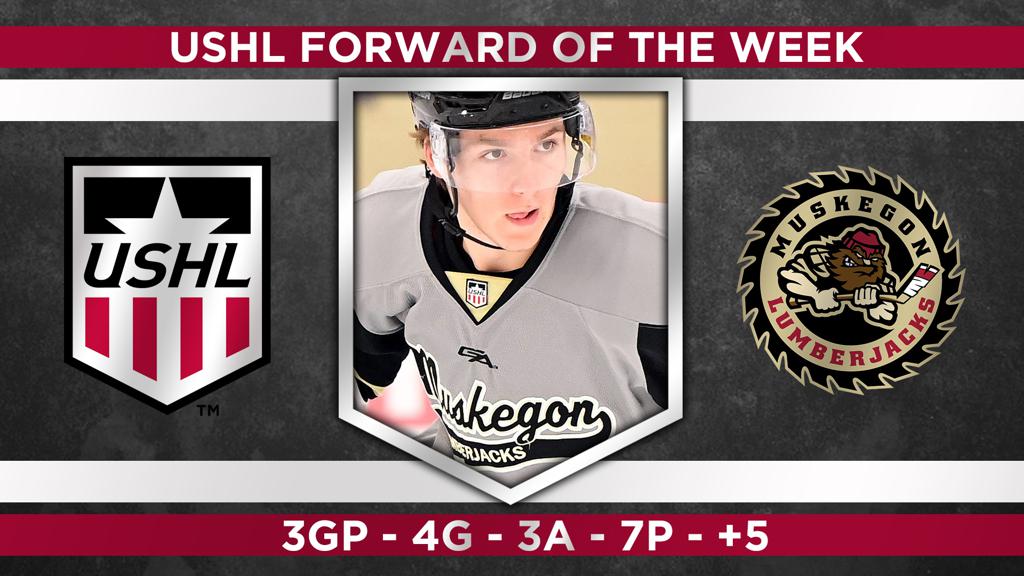 MUSKEGON, Mich. — Muskegon Lumberjacks forward Quinn Hutson has been named USHL Forward of the Week for week 10 of the 2021-22 USHL season.

A five-point night and seven-point week propelled Hutson to his first career Forward of the Week award. The Boston University commit registered a pair of goals during a 5-0 Wednesday night win over the USA Hockey National Team Development Program (NTDP). Later that week, Hutson factored into every goal in a 5-to-4 win Saturday night. The Chicago, Ill. native assisted on a pair of first-period goals before scoring twice in the second period to open up a 4-to-0 lead before picking up a primary assist on the eventual game-winning goal in the third period. This season, Hutson has recorded 21 points (11-10-21) in 18 games after nearly a point-per-game production last season that saw the second-year forward collect 42 points (16-26-42) in 45 games. The future Terrier’s five-point Saturday night was a career-high, topping his previous best of three points in five different games. Hutson now has points in four of his last five games (5-6-11).

Hutson becomes the third Lumberjack this season to win a weekly award after Jake Braccini was named USHL Forward of the Week seven days ago for Week 9 and Jacob Guevin was tabbed USHL Defenseman of the Week after his stellar performance in Week 6.

Teddy Bear Toss is back on Friday, Dec. 3! When the Jacks score their first goal against Cedar Rapids, fans are welcome to throw teddy bears onto the ice! Those bears will be collected and donated to local charities. Come for a good cause, stay for a good time! The following night on Saturday, Dec. 4, it’s Margaritaville night! Hawaiian shirts, flip flops, and beach balls will help us escape to paradise as Muskegon is transformed into Margaritaville! Feel the beach breeze as the Jacks take the ice in special Margaritaville jerseys which will be auctioned off after the game. Plus, live music during intermission! Finally, on Sunday’s matinee matchup, it’s Princess and Hero Night! Calling all princesses and heroes! The kiddos won’t want to miss this one, as our concourse will be flooded with everybody’s favorite princesses and superheroes! For more information, call the Muskegon Lumberjacks Business office at (231)-799-7000 or email afranczek@muskegonlumberjacks.com.