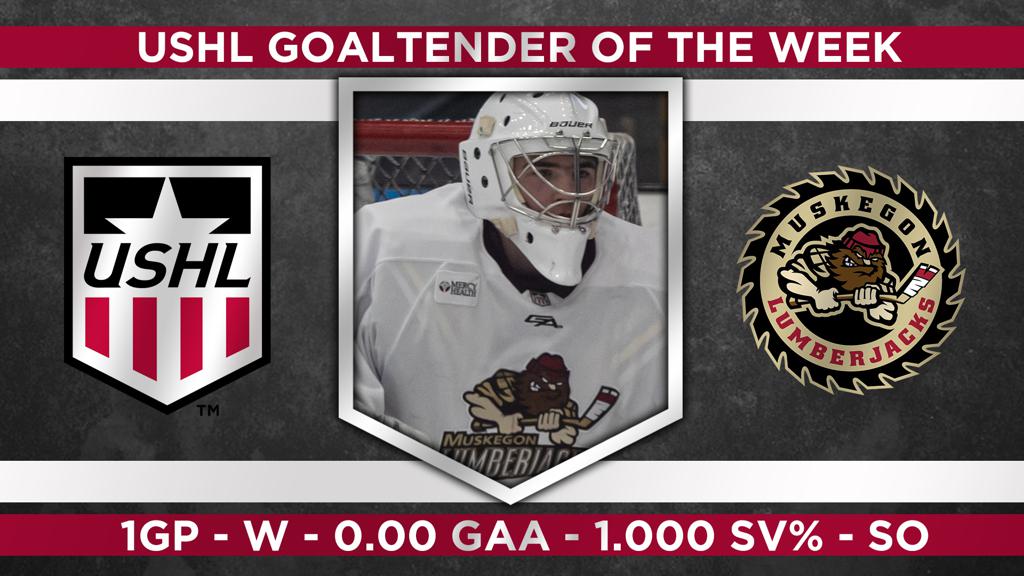 MUSKEGON, Mich. — Muskegon Lumberjacks goaltender Platon Zadorozhnyy has been named USHL Goaltender of the Week for week 11 of the USHL regular season.

With his second shutout in eight appearances this season, Zadorozhnyy earned his first USHL Goaltender of the Week after a 25-save shutout against the Cedar Rapids RoughRiders. The Moskva, Russia native’s second shutout of the season came just two appearances after his first, which was a 20-save whitewash on November 24. Zadorozhnyy has appeared in eight games for the Lumberjacks this season with a 5-3-0-0 record, 3.10 goals-against average and 0.894 save percentage, which is 12th and 11th, respectively, in the USHL this season, and is just one of four league netminders with multiple shutouts this season.

Zadorozhnny becomes the third Lumberjack in as many weeks to earn a weekly accolade with the USHL and the fourth Muskegon player to win player of the week, with Quinn Hutson and Jake Braccini taking home USHL Forward of the Week the prior two weeks, respectively, and Jacob Guevin winning defenseman of the week in week 6.

In addition, Zadorozhnyy is the first Muskegon netminder to be selected goaltender of the week since Nate Reid's performance in late February of the 2020-21 season.

Show off your holiday spirit by wearing the ugliest sweater you can find! Plus, NHL Hall of Famer Chris Chelios comes to Muskegon!  Additionally, Santa and his little helpers will be making their rounds to spread some holiday cheer! For more information, call the Muskegon Lumberjacks Business office at (231)-799-7000 or email afranczek@muskegonlumberjacks.com.