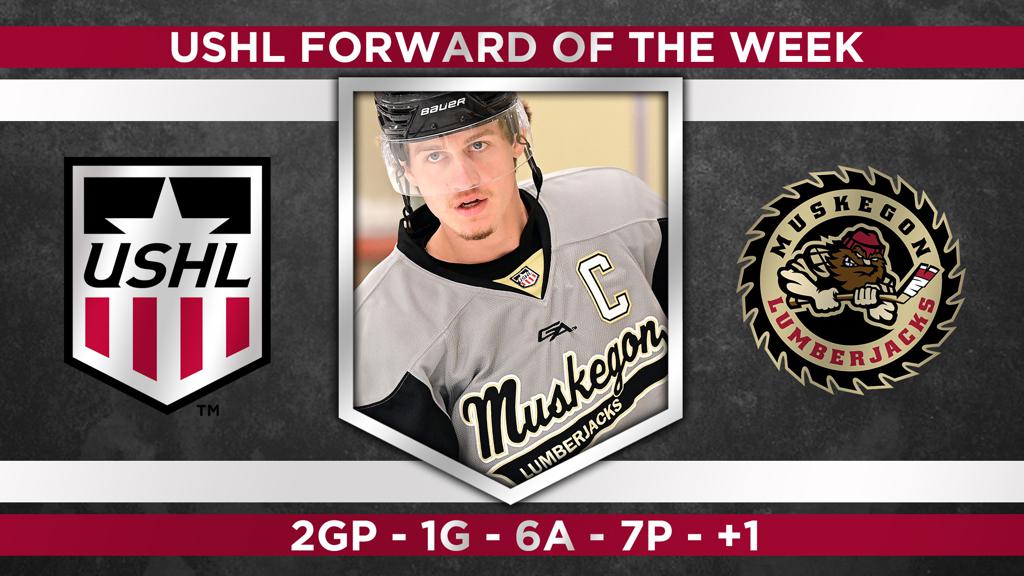 MUSKEGON, Mich. —  Muskegon Lumberjacks captain Jack Williams has been named USHL Forward of the Week for week 15 of the 2021-22 USHL regular season.

This was the first weekly award for Williams, who earned seven points over the past weekend. The Northeastern University commit started the weekend with his second career four-point game (1-3-4) in a 10-6 win over the Madison Capitols. Williams assisted on the first two Lumberjacks goals of the game before scoring a goal of his own on the powerplay in the final minute of the opening frame to open a 3-1 Muskegon lead. The Biddeford, Maine native picked up his final point of the game with a powerplay assist just 21 seconds into the second period.

The following night, Williams and the Lumberjacks picked up another road victory, this time a 7-1 win spurred on by a three-assist (0-3-3) night from Williams. The fourth-year forward assisted on the second goal of the game for Muskegon, the eventual game-winning tally before picking up another assist less than two minutes later on a shorthanded tally. The final point for Williams on the weekend came in the third period with another powerplay assist. This season, Williams has 29 points (5-24-29) through 29 games, which is tied for 19th in league scoring and tied for third in team scoring. His 24 assists is tied for ninth in the league while standing alone as second in Muskegon helpers. Williams has already set a new career-high with his 24 assists this season and is nine points away from his best scoring season, 38 points in 52 games last season.

On Friday, Jan. 14, it’s WZZM 13 on Your Side Loves Pets Night! Pound Buddies will be on the concourse with rescue animals available for adoption. The following night on Saturday, Jan. 15, it’s Star Wars Night! In a galaxy not far, far away...the Jacks take on the Green Bay Gamblers! Whether you’re on the light side or the dark side, you’re invited to watch the action with all your favorite Star Wars characters! Finally, it’s Youth Hockey Night on Sunday, Jan. 16! A night to honor local youth hockey organizations. For more information, call the Muskegon Lumberjacks Business office at (231)-799-7000 or email afranczek@muskegonlumberjacks.com.