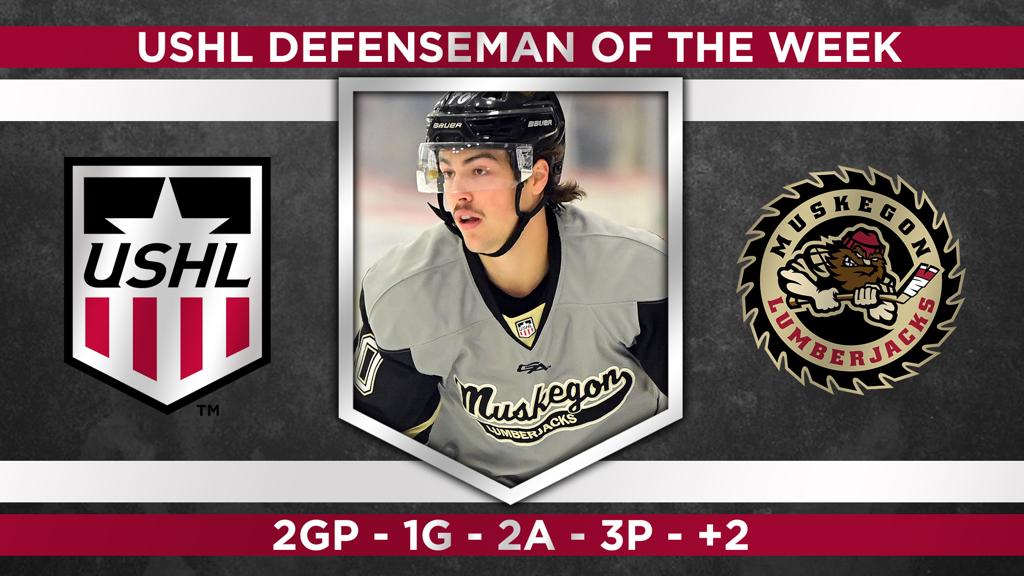 Guevin became a two-time Defenseman of the Week winner after collecting three points (1-2-3) in a pair of Semifinals wins over the Dubuque Fighting Saints. The Drummondville, Quebec native had a two-point night (1-1-2) in Game One, opening the score with a powerplay goal before picking up an assist with the man advantage midway through the third frame of a 4-3 win. On Sunday, Guevin registered a second assist on the weekend midway through the opening period of a Game 2, 8-5 win on Sunday night. The University of Nebraska-Omaha commit now has five points (2-3-5) in four Playoff games this season with a point in all four of Muskegon’s contests this postseason. Guevin is NHL Draft eligible this summer after having been ranked 173rd among North American skaters on the NHL Central Scouting Final Rankings and finished the 2021-22 regular season with 57 points (6-51-57) in 59 games. Guevin is in his second full season with the Lumberjacks and was named to the USHL All-Rookie First Team after picking up 45 points (7-38-45) in 53 games his rookie season.

The #3 Muskegon Lumberjacks have punched their ticket to the 2022 Eastern Conference Final, where they will face off with the #5 Madison Capitols in a best-of-five, third-round playoff series. Games 1 and 2 are scheduled at Mercy Health Arena in Muskegon on Friday and Saturday, May 6 and 7, respectively, with puck drop at 7:00 pm EDT. The Lumberjacks will go on the road for at least one game in the Conference Final, with Game 3 slated for Monday, May 9 at 7:00 pm in Madison. Game 4 (if necessary) will also take place in Madison on Tuesday, May 10 with a decisive Game 5 (if necessary) on Thursday, May 12 in Muskegon. The Eastern Conference Finals will be a best-of-five format, meaning a team needs to win three games in the series to advance to the Clark Cup Final. To purchase tickets for Friday’s home playoff game, go to www.muskegonlumberjacks.com/playoffs2022 now!