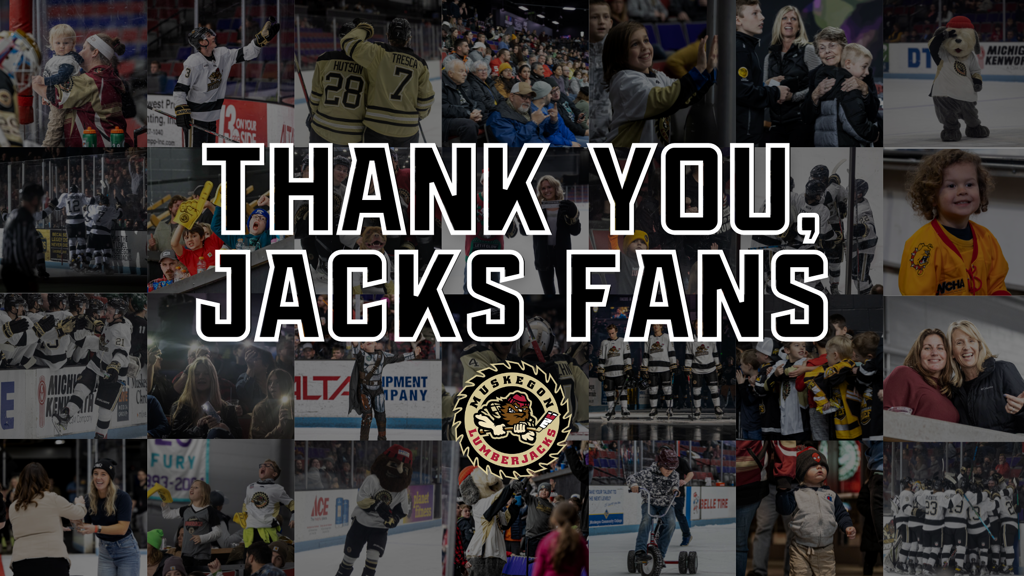 MUSKEGON, Mich. — The Muskegon Lumberjacks had their 2021-22 season come to an end after the Madison Capitols eliminated the Lumberjacks out of the playoffs by a final score of 8-to-4 in Game 5 of the Eastern Conference Final on Thursday, May 12, 2022, from Mercy Health Arena, taking the best-of-five series 3-2. The Jacks started out hot in the first after a power play goal from Joey Larson, but six unanswered goals from Madison propelled the Caps to their first-ever berth in the Clark Cup Final. Other Lumberjack tallies include goals from Jake Braccini, Ben Strinden and Owen Mehlenbacher. With the loss, Muskegon’s season will come to a close as Madison advances to the Clark Cup Final and a meeting with the Sioux City Musketeers from the Western Conference.

It would be the Lumberjacks to score first, this time from Joey Larson on the power play at 8:03 of the first period. Larson’s fourth goal of the playoffs was assisted by Noah Ellis and Jake Braccini to give Muskegon the early 1-to-0 lead in Game 5.

Through 20 minutes in Game 5 of the Eastern Conference Final, the Lumberjacks took a 1-to-0 lead into the dressing room.

It was all Madison in the second period, just like they did in earlier contests, jumping out to a 3-to-1 lead. Just 66 seconds into the second period, Madison’s Tyler Haskins tied the game 1-to-1 with his third of the playoffs and the lone assist going to Jake Dunlap.

The Capitols made it a 2-to-1 contest just 74 seconds later with a goal from DJ Hart at 2:20 of the second period. Hart’s first playoff goal was assisted by Matthew McGroarty and Barrett Brooks.

Madison extended the lead to 3-to-1 at 9:30 of the second period after a goal from Jack Musa. Jack Horbach and Kyle Kukkonen picked up assists on Musa’s sixth goal of the playoffs.

Through two periods in Game 5, the Capitols stole all the momentum, leading 3-to-1 at the end of 40 minutes.

The Capitols continued their momentum in the third period, with Reid Pabich making it a 4-to-1 game at 4:08 of the period. Pabich’s third of the playoffs was assisted by Jake Dunlap and Nick Wallace.

Just over a minute later at 5:11, Jack Musa made it a 5-to-1 game for the Capitols with his seventh goal of the playoffs. Musa’s lamplighter was assisted by Kyle Kukkonen.

The bleeding got worse for Muskegon with Madison’s Luke Mittelstadt scoring to make it 6-to-1 at 7:29 of the third period. Mittelstadt’s second goal of the playoffs was assisted by Reid Pabich and Jake Dunlap.

The Lumberjacks would pull within four goals after Jake Braccini found the back of the net to make it 6-to-2 at 8:25. Braccini’s second playoff marker was assisted by Noah Ellis and Jacob Napier.

Ben Strinden appeared to make it interesting for the Lumberjacks at 12:04 to cut the deficit to 6-to-3. Strinden’s third goal of the postseason was assisted by Phil Tresca and Jacob Guevin.

However, Madison quickly shifted the momentum back to their side 28 later with a goal from Reid Pabich to restore the four-goal lead to make it a 7-to-3 score. Pabich’s fourth goal of the playoffs was assisted by Jake Dunlap at 12:32 of the period.

While on the power play, Muskegon’s Owen Mehlenbacher added one more goal for the Lumberjacks, cutting the lead to 7-to-4 at 15:38 of the third period. Mehlenbacher’s fourth playoff goal was assisted by Joey Larson and Jake Braccini.

Alas, with the Lumberjack net empty, Madison’s Kyle Kukkonen sealed the game for the Captiols, giving them the 8-to-4 lead.

Another full season is in the books for the Muskegon Lumberjacks, in which they qualified for the postseason for the eighth time in franchise history since the 2010-11 inaugural season and advanced to the Eastern Conference Final for the third consecutive playoff season. The Jacks had a rocky start to begin the year, going 2-7-1-2 in the first 12 games, but rebounded exponentially in the middle of the season by posting a 20-3-1-0 record in their next 24 contests and climbed out of last place all the way to first. Included in their ascent to the top was tying the franchise record with an eight-game winning streak, smashing the franchise record for the longest home-game winning streak with 10 consecutive victories, and setting the record for the longest point streak at 13 contests. Head Coach Mike Hamilton earned his 100th career win behind the Jacks bench on Nov. 19, 2021, while three players notched their 100th career points, those being Quinn Hutson, Jack Williams, and Jacob Guevin.

In the Record Book Part I

Lumberjacks captain Jack Williams (116 career points) cements himself as the third all-time leader in points in Muskegon Lumberjacks history, with fellow teammate Quinn Hutson (115 career points) right behind him for fourth all-time in points. Hutson, who will attend Boston University in the fall, lit the lamp 49 times in his USHL career, will leave Muskegon as the fifth all-time leading goal scorer in franchise history, and added an additional 16 points in the playoffs. Williams, who is heading to Northeastern University next season, played the third-most games in Lumberjacks history with 163 contests over four seasons and put up an impressive 11 points in the postseason.

In the Record Book Part II

Lumberjacks defenseman Jacob Guevin broke the USHL Tier I single-season mark for assists by a defenseman with 51 helpers in the regular season. In addition, the Jacks blueliner became the ninth player in franchise history, the 10th defenseman in USHL history to put up 100 career points, and the third Lumberjack to hit triple digits this season, alongside teammates Quinn Hutson and Jack Williams. The Drummondville, Quebec native has had a season for the record books, in which he surpassed Colby Bukes to score the most points by a defenseman in team history and has scored more assists than any player in franchise history, overtaking Daniil Gushchin for the record. Guevin, who will attend the University of Nebraska Omaha this upcoming fall scored three goals and six assists for nine points in Muskegon’s playoff run.

On Thursday, May 2, National Hockey League (NHL) Central Scouting released their final rankings for the upcoming 2022 NHL Entry Draft. In all, three current Lumberjacks, three affiliates, and one draft pick made the list. Current Lumberjacks include defensemen Jacob Guevin (No. 173), Tyler Dunbar (No. 175), and Jeremiah Slavin (No. 219). In addition, three affiliates were named to the watch list, those being George Fegaras (No. 82), Michael Callow (No. 131), and Matthew Morden (No. 190) plus one draft pick, Jackson Krykostas (No. 203). The 2022 NHL Draft is scheduled from July 7-8, 2022, and will be hosted by the Montreal Canadiens at Bell Centre in Montreal, Quebec.