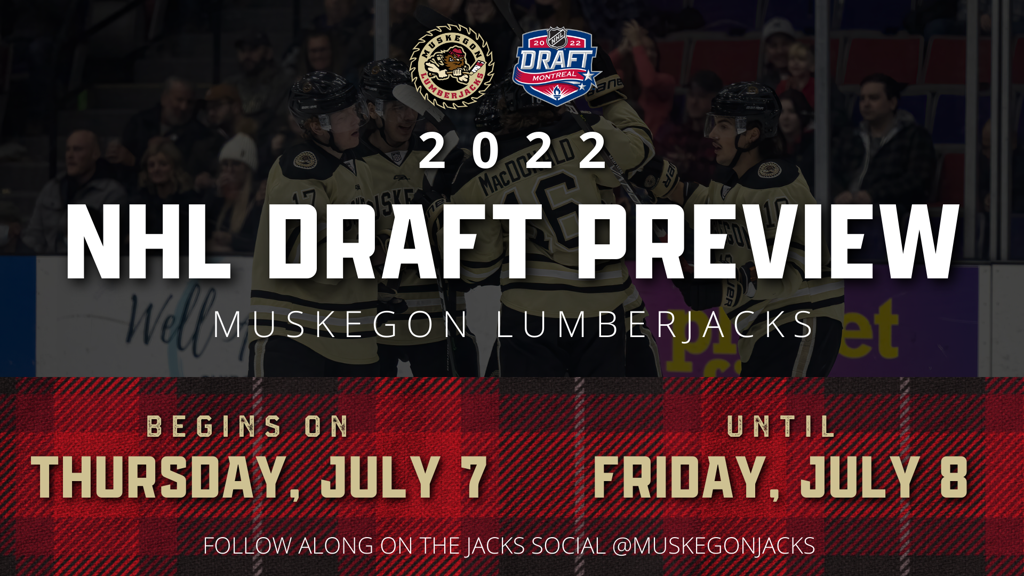 MUSKEGON, Mich. —  In preparation for the 2022 NHL Upper Deck Draft™, the Muskegon Lumberjacks have numerous current, former, and future players hopeful to be selected. In all, more than 30 players who have ties to the Lumberjacks are eligible for the upcoming 2022 NHL Draft.

Below is a list of eligible players from the Muskegon Lumberjacks including their final ranking from NHL Central Scouting.

NOTE: a player listed as "NR" defines as not ranked in the NHL Central Scouting Final Rankings. 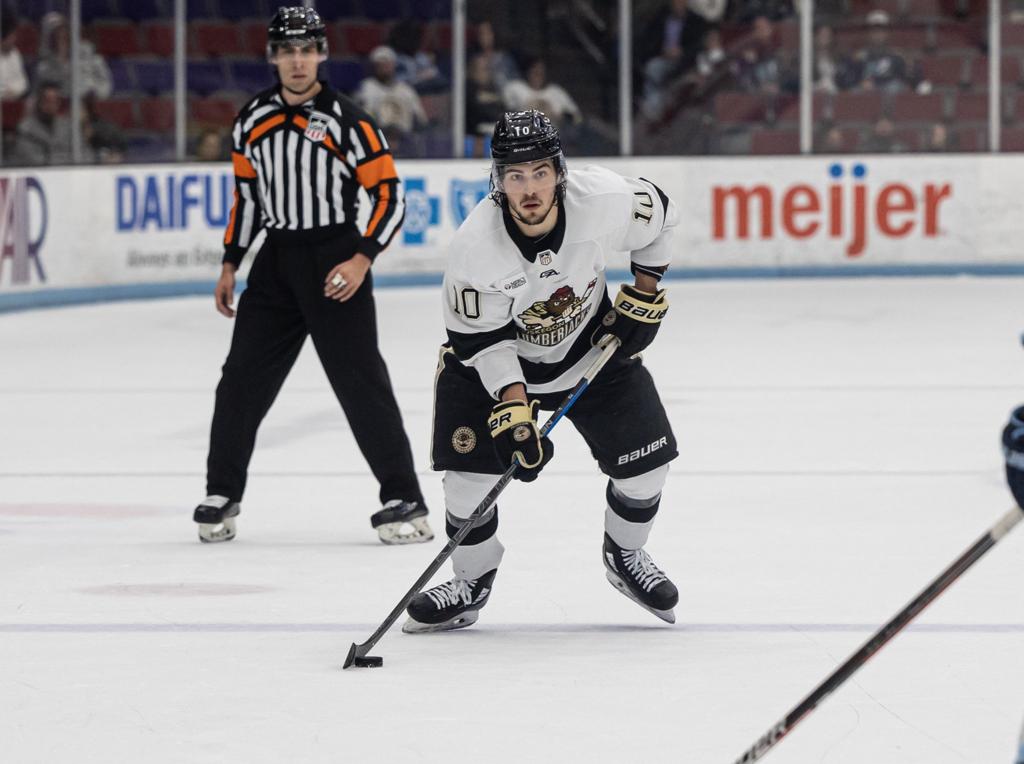 Guevin, the 5-foot-11, 181-pound defenseman appeared in 59 games with the Lumberjacks in 2021-22, totaling six goals and 51 assists for 57 points. This past season, the Drummondville, Quebec native broke the USHL Tier I single-season mark for assists by a defenseman with 51 helpers, earning him a spot on the All-USHL Second Team. In addition, the Jacks blueliner became the ninth player in franchise history, the 10th defenseman in USHL history, and the third Lumberjack to put up 100 career points this past season, alongside teammates Quinn Hutson and Jack Williams. The Nebraska Omaha recruit had a season for the record books, in which he surpassed Colby Bukes to score the most points by a defenseman in team history and has scored more assists than any player in franchise history, overtaking Daniil Gushchin for the record.

Dunbar, the 6-foot, 185-pound defenseman appeared in 61 games with the Lumberjacks during the 2021-22 season, scoring four goals and 21 assists for 25 points from the blue line. The Sault Ste. Marie, Mich. native eclipsed the 100 career USHL game mark last season, adding him to the long list of Muskegon players to hit triple digits in games played. Dunbar, one of Muskegon’s most seasoned veterans, is committed to the University of North Dakota. 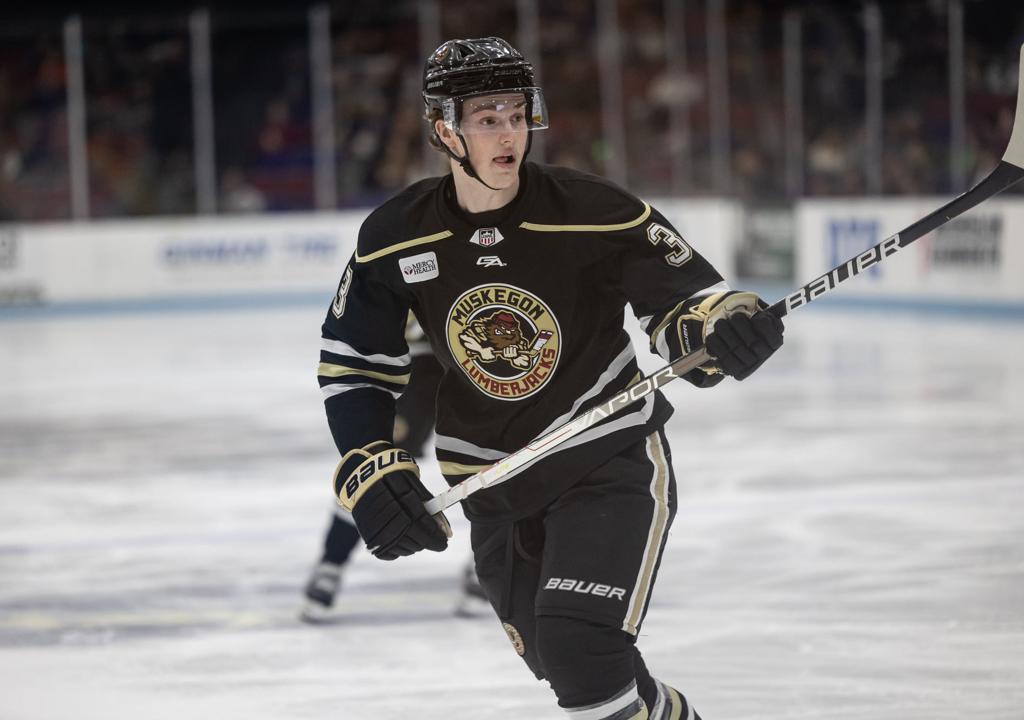 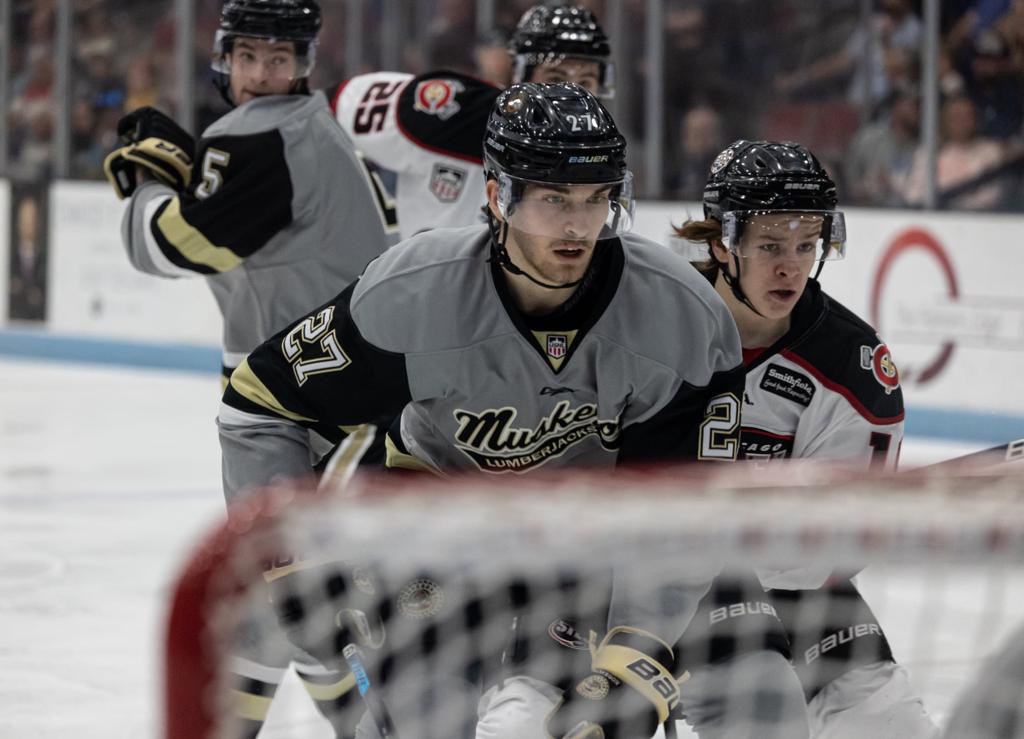 Slavin, the 6-foot-2, 198-pound defenseman skated in 42 games with the Lumberjacks in 2021-22, completing his rookie season in the USHL with two assists. Known as a quality defender in the defensive zone, the Colorado College commit posted a +9 rating. Coming from a deep hockey family, the Erie, Colo. native has two brothers who have previously been drafted into the NHL: Jaccob (2012 Carolina, 4th round, 120th overall) and Josiah (2018 Chicago, 7th round, 193rd overall). Like his brothers before him, Slavin is committed to playing at Colorado College.

Tresca, the 6-foot, 190-pound forward skated in 61 games with the Lumberjacks in 2021-22, amassing 28 goals and 26 assists for 54 points. The Newton, Mass. native was selected to Team White in the 2022 BioSteel All-American game alongside Muskegon teammate Ben Strinden. Tresca, one of two alternate Muskegon captains from last year, will attend Harvard University this upcoming fall. 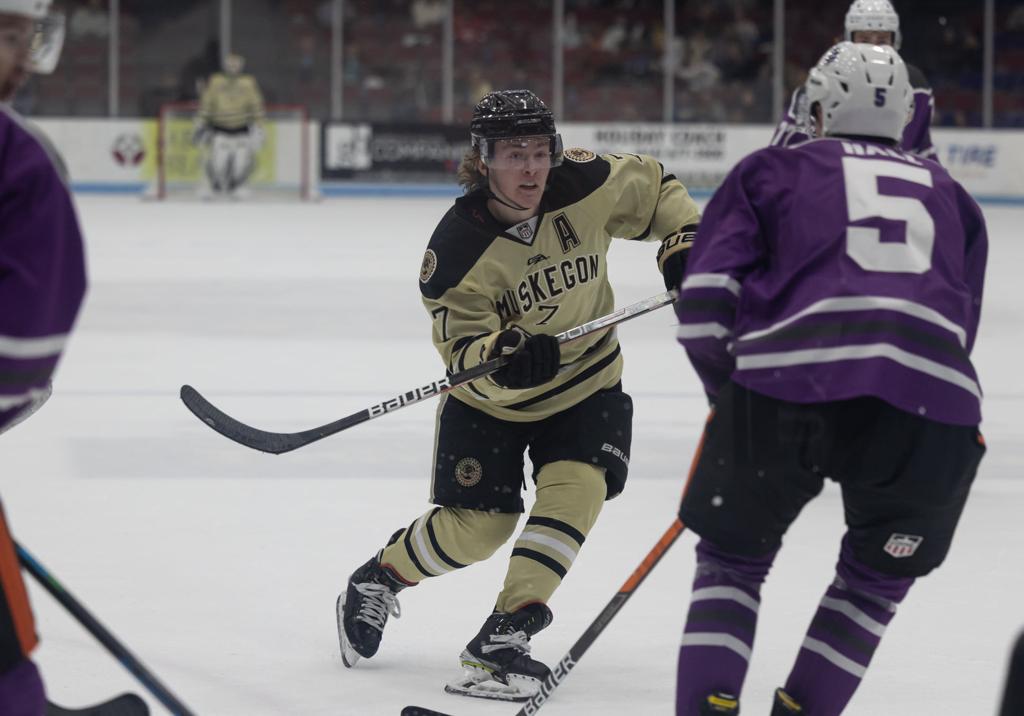 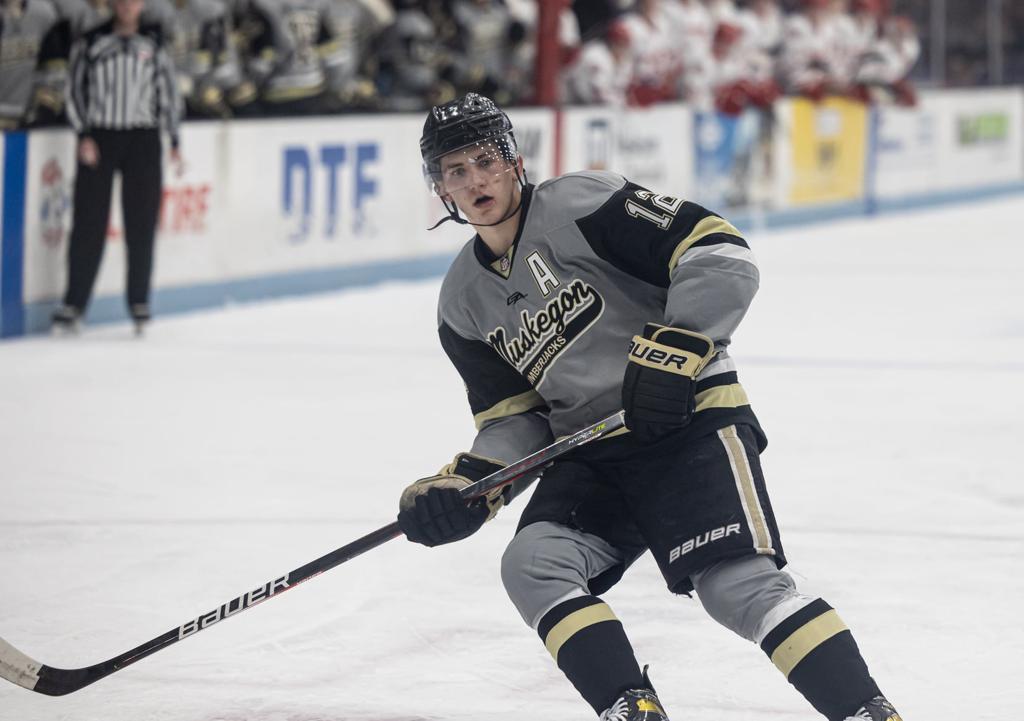 Strinden, the 6-foot-1, 185-pound forward played in 61 games with the Lumberjacks in 2021-22, scoring 25 goals and 32 assists for 57 points. The Fargo, N.D. native was selected to Team White in the 2022 BioSteel All-American game alongside fellow teammate Phil Tresca. Strinden, one of two alternate Muskegon captains from last year, will attend the University of North Dakota this fall.

Williams, the 5-foot-11, 174-pound forward played in 58 games as Muskegon’s captain in 2021-22, putting up 18 goals and 41 assists for 59 points. The Biddeford, Maine native closed his USHL career by becoming the eighth Lumberjack in franchise history to score 100 career points – after notching 116 career points in his USHL career – the third-most in franchise history. The Northeastern University commit leaves Muskegon having played 163 games over the course of four seasons, the third-most games played in Lumberjacks history. 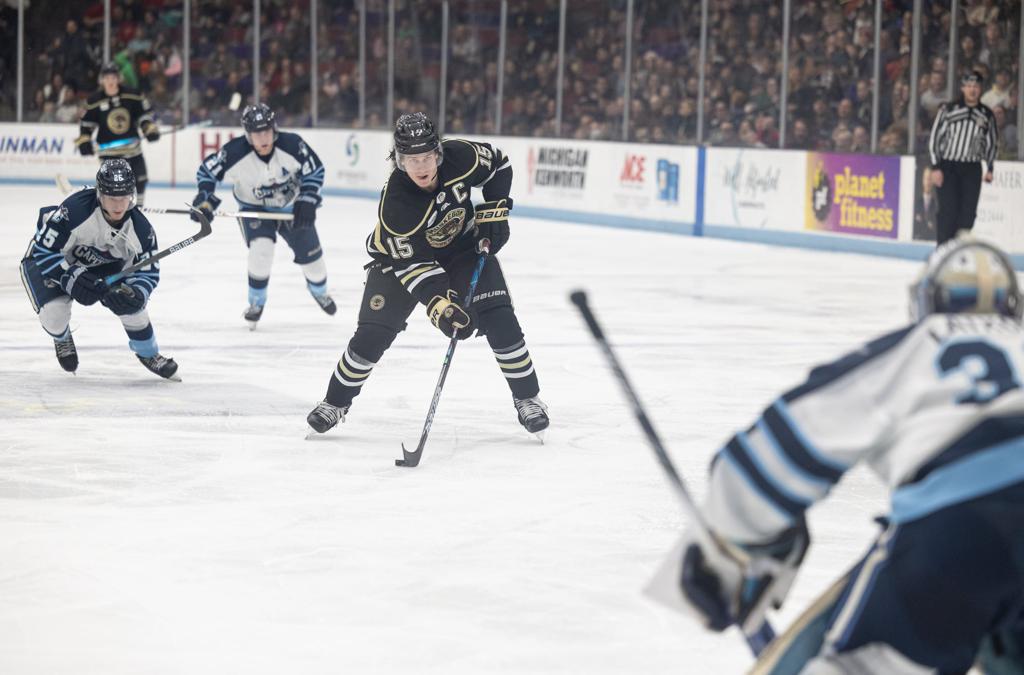 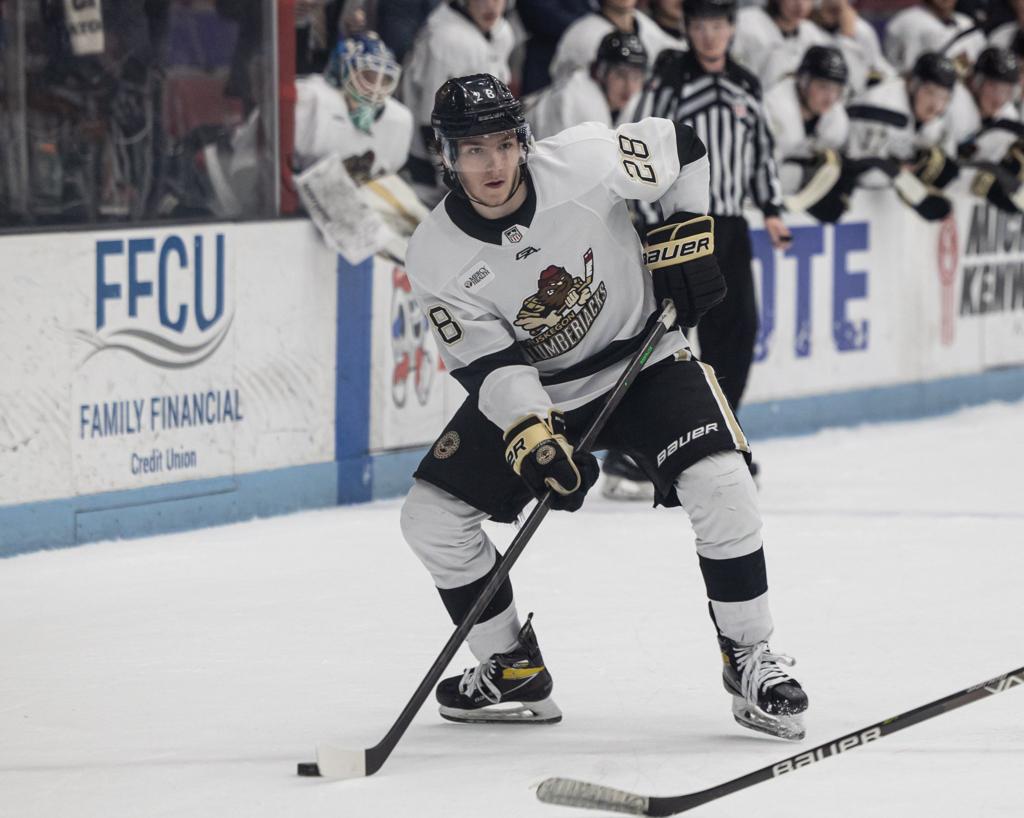 Hutson, the 5-foot-11, 171-pound forward appeared in 59 games with the Lumberjacks in 2021-22, leading the team in points with 33 goals and 40 assists for 73 points, earning him a spot on the All-USHL Second Team. The Barrington, Ill. native became the seventh player in franchise history to score 100 career points and ranked second in point-scoring during the 2022 Clark Cup Playoffs with 16 points in just nine games. The Boston University commit ends his USHL playing career with a grand total of 115 points, good for fourth all-time in Lumberjacks history.

Hutson’s younger brother, and USNTDP U18 standout defenseman, Lane, was ranked No. 25 on the NHL Central Scouting Final Rankings and recently won the E.J. McGuire Award of Excellence from the NHL for best exemplifying a commitment to excellence through strength of character, competitiveness, and athleticism.

Hymovitch, the 5-foot-11, 184-pound forward completed his second season with the Lumberjacks in 2021-22, appearing in 50 games and scoring six goals and 13 assists for 19 points. The Scottsdale, Ariz. native saw career highs in goals, assists, and points, putting up nine additional points from 2020-21. Hymovitch is committed to Quinnipiac University. 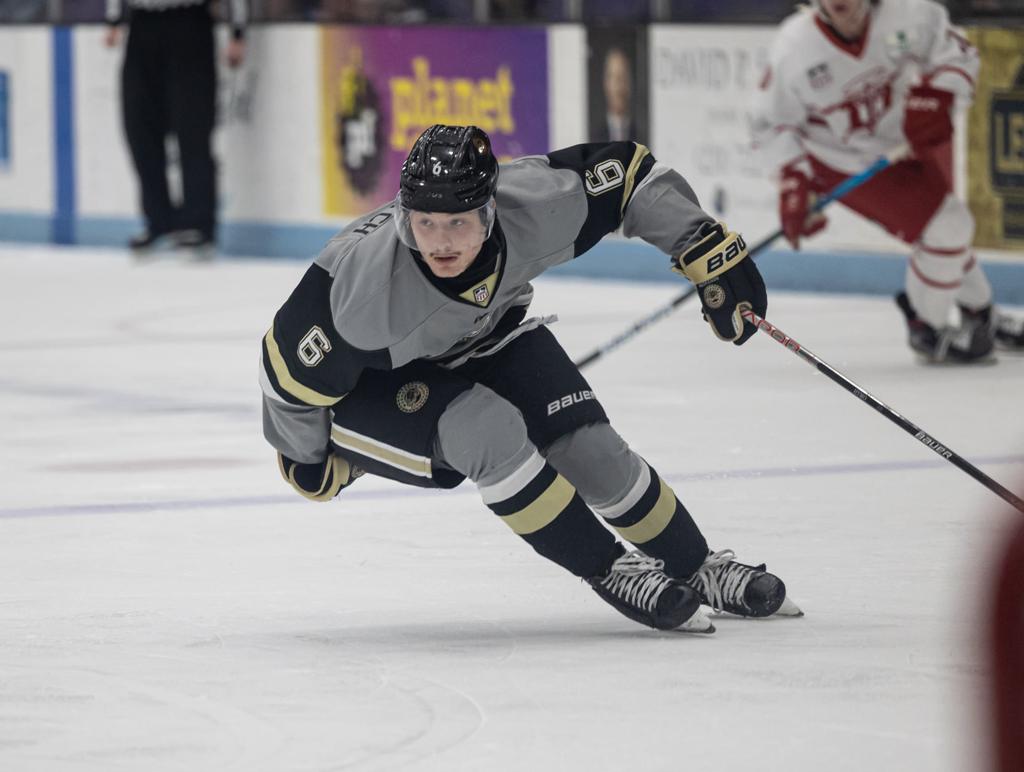 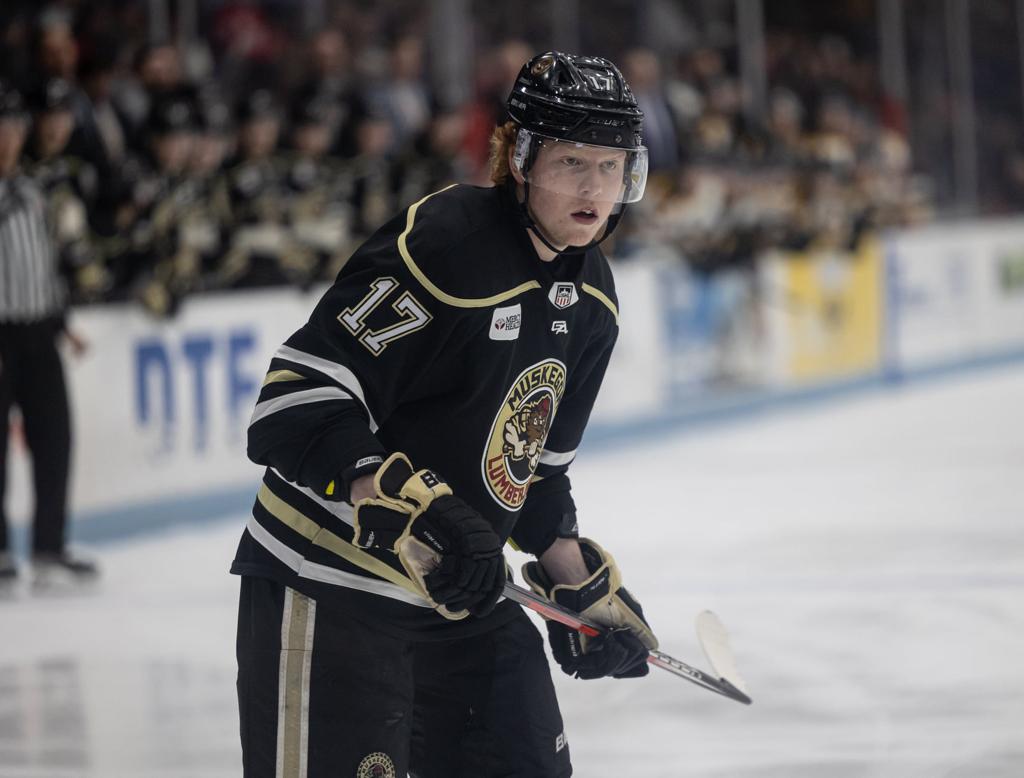 Hotson, the 6-foot, 163-pound forward finished his rookie season with the Lumberjacks in 2021-22, skating in 60 games and contributing seven goals and 20 assists for 27 points. The Stratford, Ontario quickly stepped in to enhance Muskegon’s depth last season. Hotson is committed to Rensselaer Polytechnic Institute (RPI).

Whitcomb, the 6-foot-4, 192-pound forward played in 44 games during his rookie season with the Lumberjacks in 2021-22, scoring 16 points off of eight goals and eight assists. Before battling through numerous injuries throughout the season, the St. Catherines, Ontario native was originally ranked on the NHL Central Scouting Preliminary list. Whitcomb is committed to the University of Nebraska Omaha. 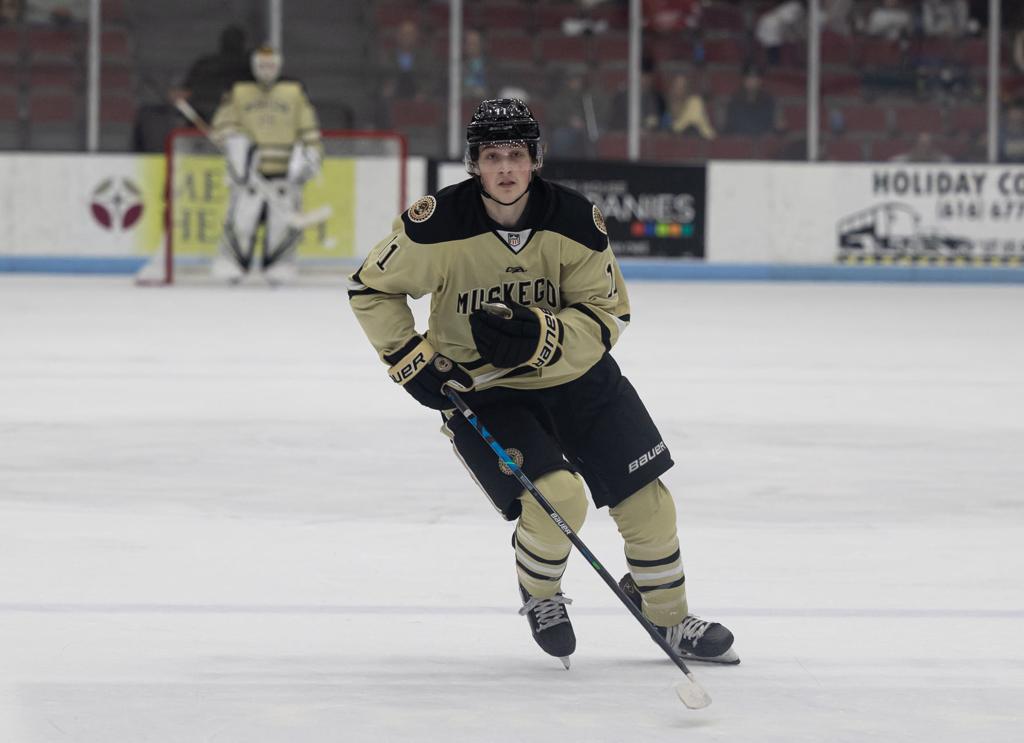 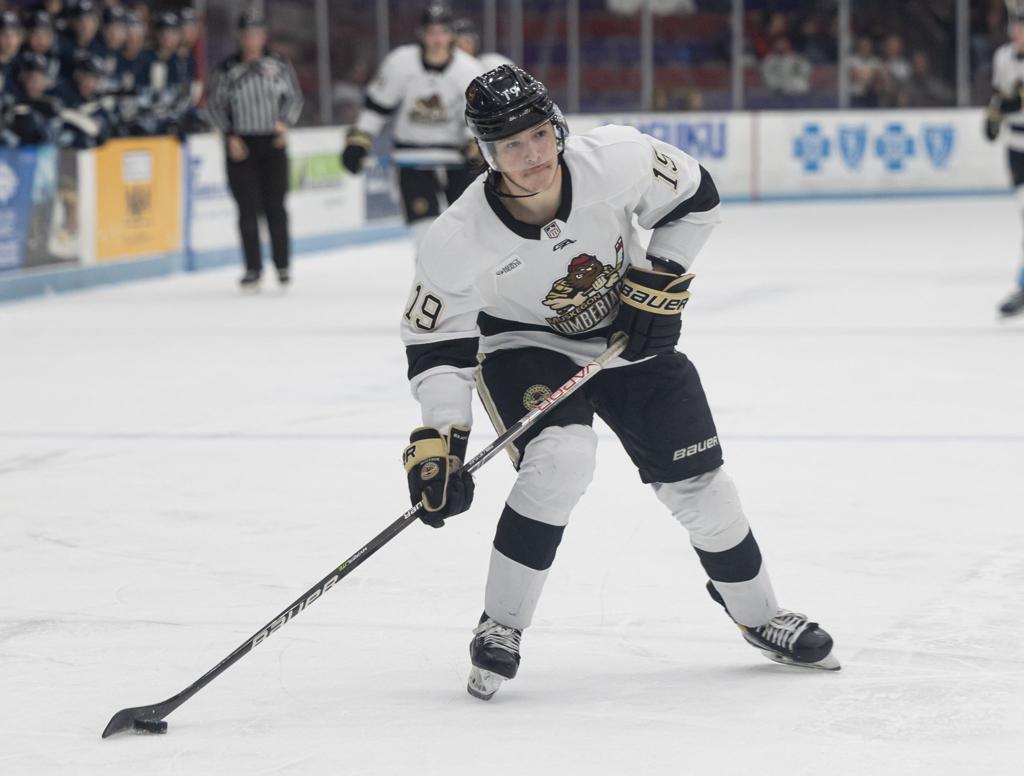 Richard, the 6-foot-1, 171-pound forward skated in 56 games with Muskegon during his rookie year in 2021-22, putting up an impressive 18 goals and 30 assists for 48 points. The Jacksonville, Fla. native exploded offensively during the second half of the season, amassing 41 points after the Christmas break. The University of Connecticut recruit ranked fifth in USHL rookie point scoring and led the Lumberjacks in points by a rookie by more than double digits.

Mehlenbacher, the 6-foot-2, 189-pound forward appeared in 56 contests with the Lumberjacks during the 2021-22 season, potting 17 goals and 25 assists for 42 points. The Fort Erie, Ontario native saw career highs in goals, assists, and points, scoring 30 additional points from the 2020-21 season. The University of Wisconsin commit was named to the USHL All-Academic Team in 2021-22. 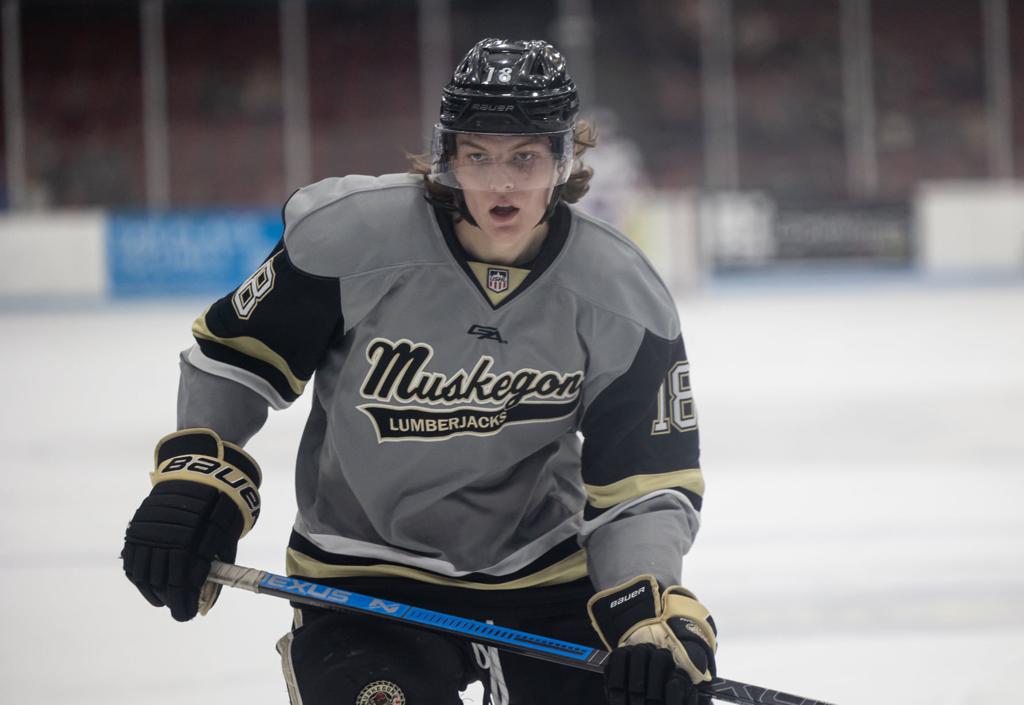 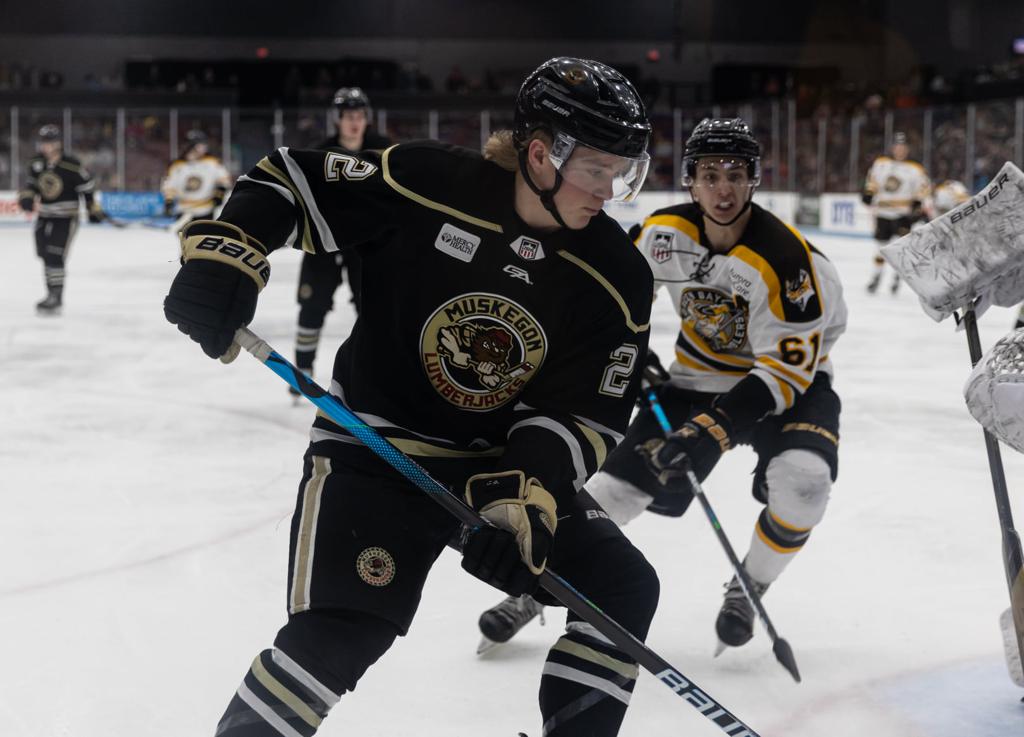 Peluso, the 5-foot-9, 150-pound forward dressed in 39 games with the Lumberjacks during the 2021-22 season, scoring three goals and six assists for nine points. Despite his size, the Rochester, N.Y. is known for his tenacious style of play, not afraid to work in the so-called dirty areas, and plays a 200-foot game. Peluso is committed to the University of Maine. 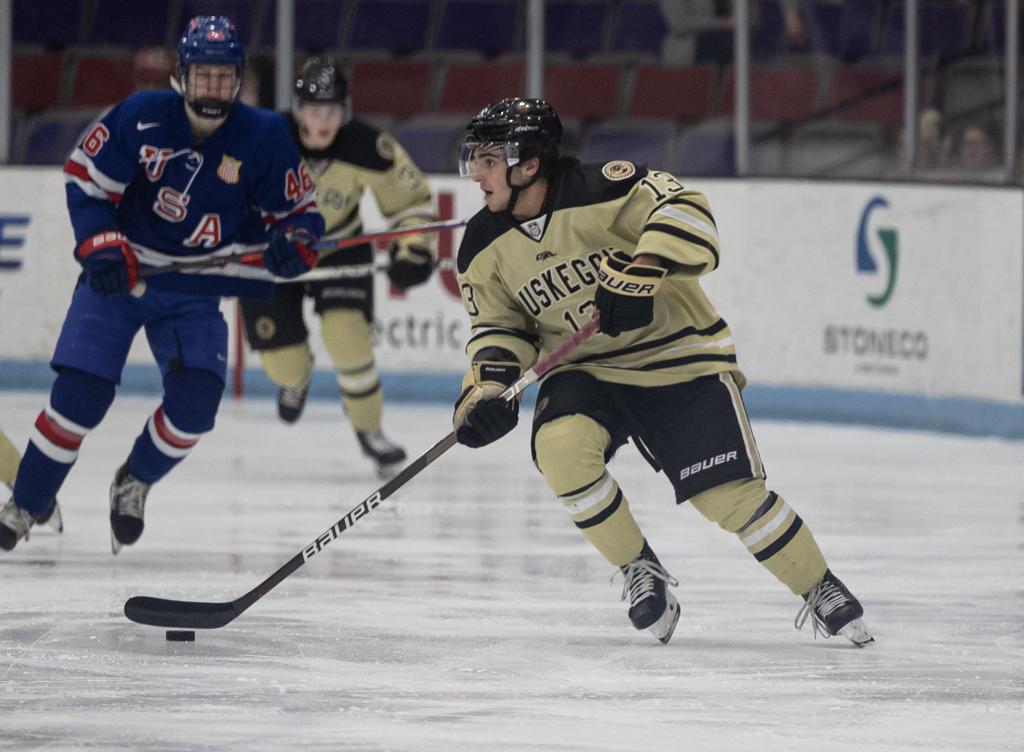 In addition, multiple future Lumberjacks players are eligible to be selected in the upcoming draft. These include George Fegaras (#82), Michael Callow (#131), Matthew Morden (#190), and Jackson Kyrkostas (#203).

The connections don’t stop there as Rutger McGroarty, son of Lumberjacks GM Jim McGroarty, was ranked No. 22 on the NHL Central Scouting Final Rankings and is projected to be selected in the first round.

The Jacks have seen a lot of success in the NHL Draft, having at least one player selected in each of the previous 10 NHL Drafts, including a total of 29 during that span.

Muskegon's highest draft pick was Andrei Svechnikov, who was selected second overall by the Carolina Hurricanes in the 2018 NHL Draft.

To view the full draft coverage on NHL.com, click HERE.

The Muskegon Lumberjacks have announced the 2022-23 regular-season schedule. In total, the season will consist of 62 regular-season contests in a regionally-based schedule. Flannel Fest will make its return on Sept. 30 for Muskegon’s home opener against the Chicago Steel. In all, fans will have the opportunity to witness live Lumberjack hockey 30 times this upcoming year, including 30 unique theme nights for each home game. All home games – with the exception of Dec. 31 – will have a 7:00 pm ET start time from Trinity Health Arena in downtown Muskegon. Single-game tickets, along with the full promotional schedule – including theme nights – will be released at a later date. Season tickets are on sale now. To view the full schedule, click HERE.

Not currently a Lumberjacks season ticket holder? Season tickets for the 2022-23 season are now on sale. For more information, call the Muskegon Lumberjacks Business office at (231)-799-7000 or email afranczek@muskegonlumberjacks.com.