“This was a pretty big day for the Muskegon Lumberjacks,” said Steve Lowe, President of Hockey Operations for the team. “I think this was a club record for us and what’s even more exciting is that we will have five NHL draft picks on next year’s 2022-23 roster.”

“We’re looking forward to taking the next steps on being one of the best development programs in North America.” 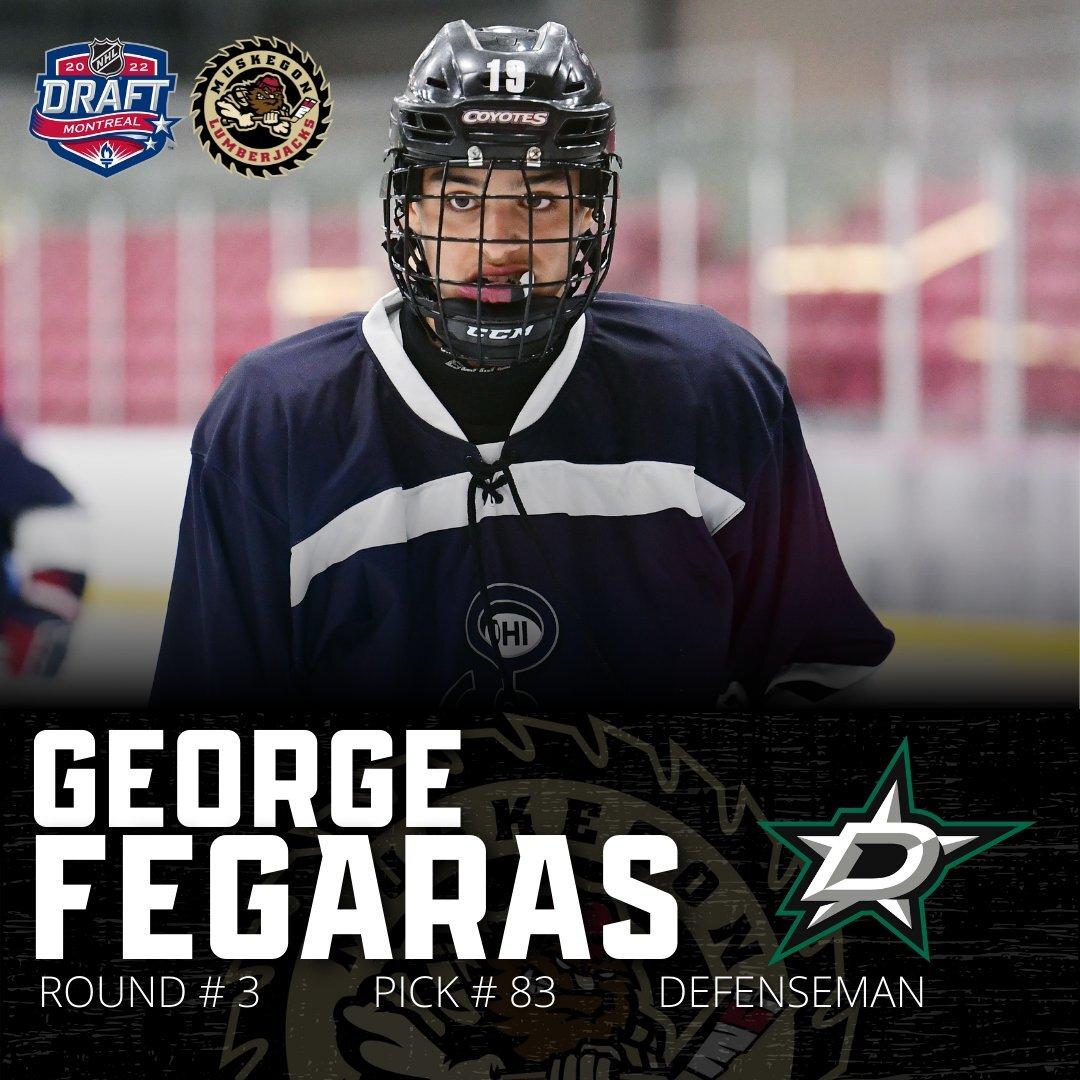 Fegaras, the 6-foot-2, 185-pound defenseman was selected by the Dallas Stars in the third round, 83rd overall. The Richmond Hill, Ontario native skated in 52 games with the North York Rangers in the Ontario Junior Hockey League (OJHL) during the 2021-22 season, putting up 13 goals and 35 assists for 48 points from the blueline. Fegaras was originally drafted by Muskegon in the seventh round, 104th overall in the 2021 USHL Phase II Draft. The future Lumberjack is committed to playing NCAA collegiate hockey at Cornell University.

Morden, the 6-foot-4, 203-pound defenseman was drafted by the Arizona Coyotes in the fifth round, 131st overall. The Burlington, Ontario native skated in 41 games with St. Andrew’s College during the 2021-22 season, scoring eight goals and 27 assists for 35 points from the blueline. Morden also suited up for a pair of games with the Lumberjacks in the 2021-22 season while also representing his home country by playing for Team Canada for the U18 World Championships. Morden was originally drafted by Muskegon in the seventh round, 95th overall in the 2021 USHL Phase I Draft. The future Muskegon Lumberjack is committed to playing NCAA collegiate hockey at Harvard University. 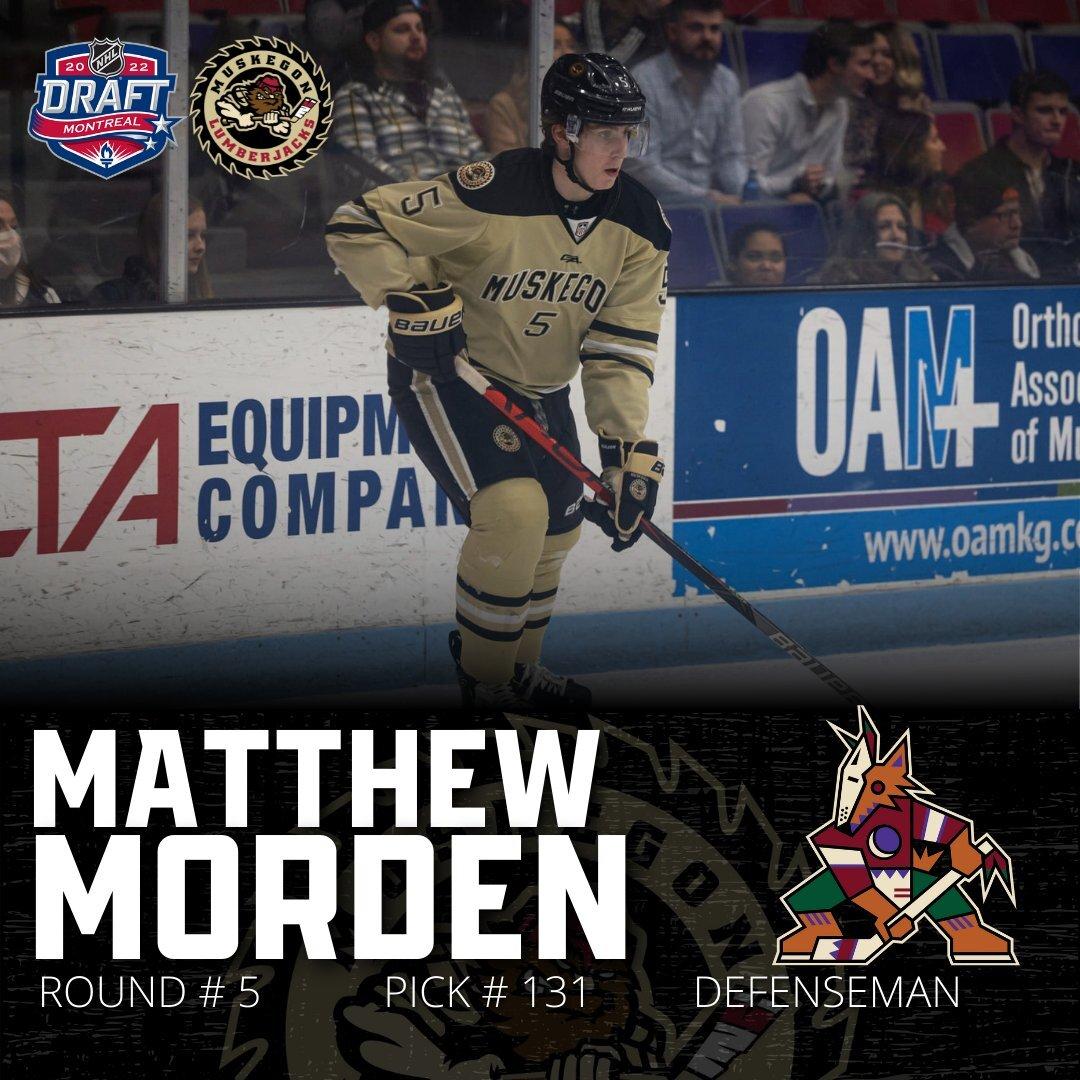 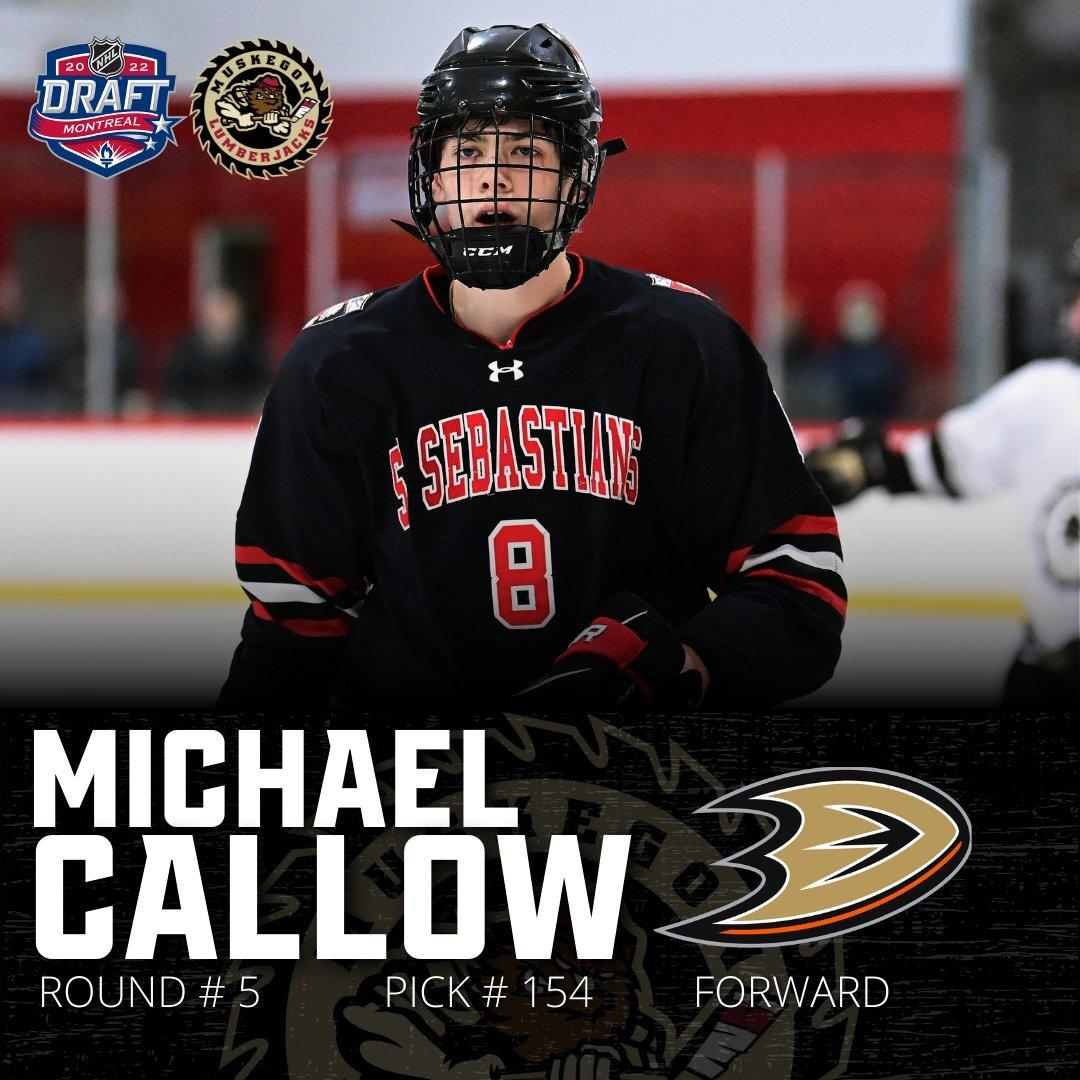 Callow, the 6-foot-4, 194-pound right-winger was picked by the Anaheim Ducks in the fifth round, 154th overall. The South Boston, Mass. native played in 25 games with St. Sebastian’s School this year, scoring 26 goals and 15 assists for 41 points. The Muskegon Lumberjacks selected Callow in the 10th round, 140th overall in the 2020 USHL Phase I Draft. The future Muskegon Lumberjack, along with fellow future teammate Matthew Morden, is committed to playing NCAA collegiate hockey at Harvard University.

Richard, the 6-foot-1, 171-pound forward was selected by the Buffalo Sabres in the sixth round, 170th overall. The Jacksonville, Fla. native skated in 56 games with the Lumberjacks during his rookie year in 2021-22, amassing 18 goals and 30 assists for 48 points. The University of Connecticut commit ranked fifth in USHL rookie point scoring and led the Lumberjacks in points by a rookie by more than double digits after an incredible second half of his rookie campaign. Muskegon originally selected Richard in the third round, 42 overall in the 2021 USHL Phase I Draft. 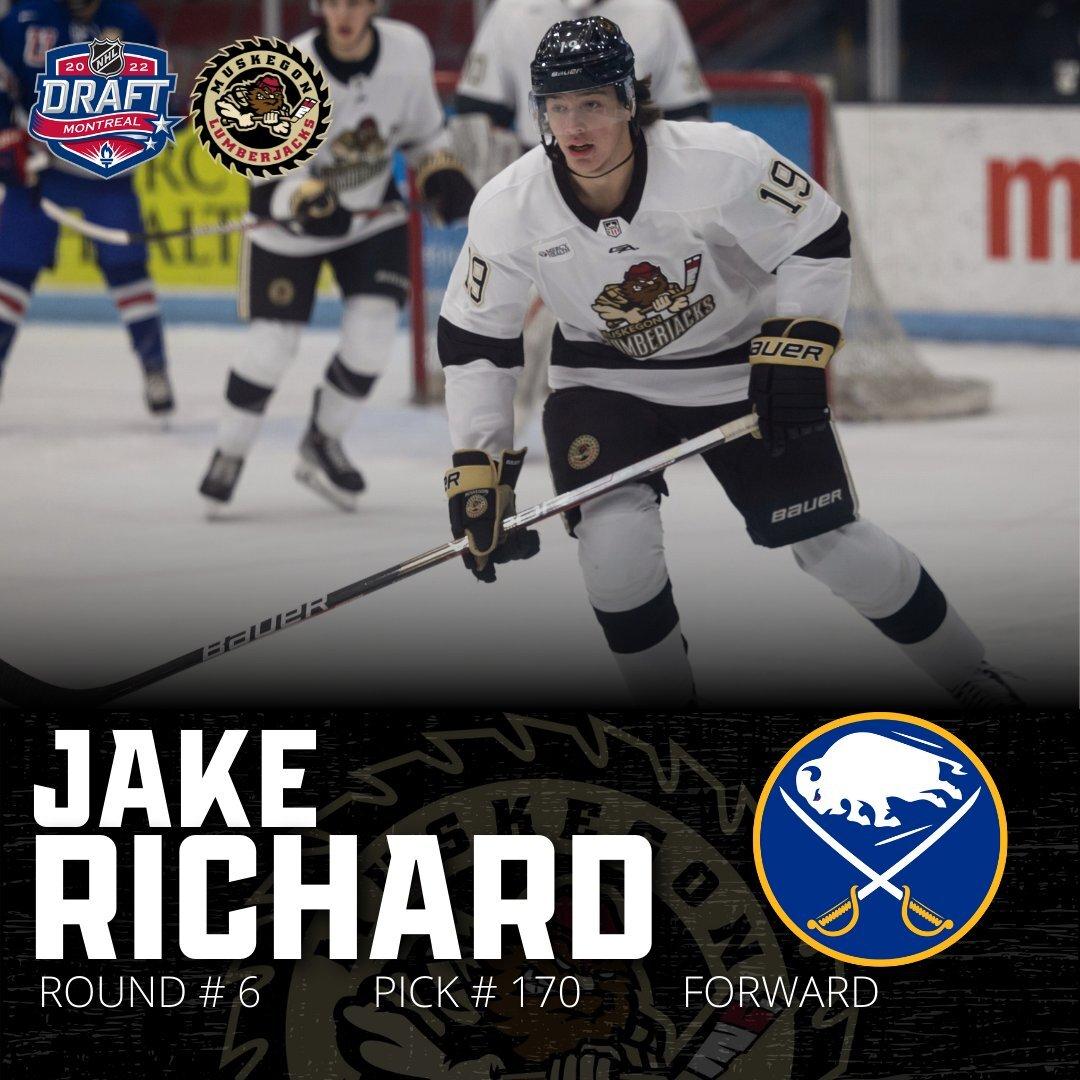 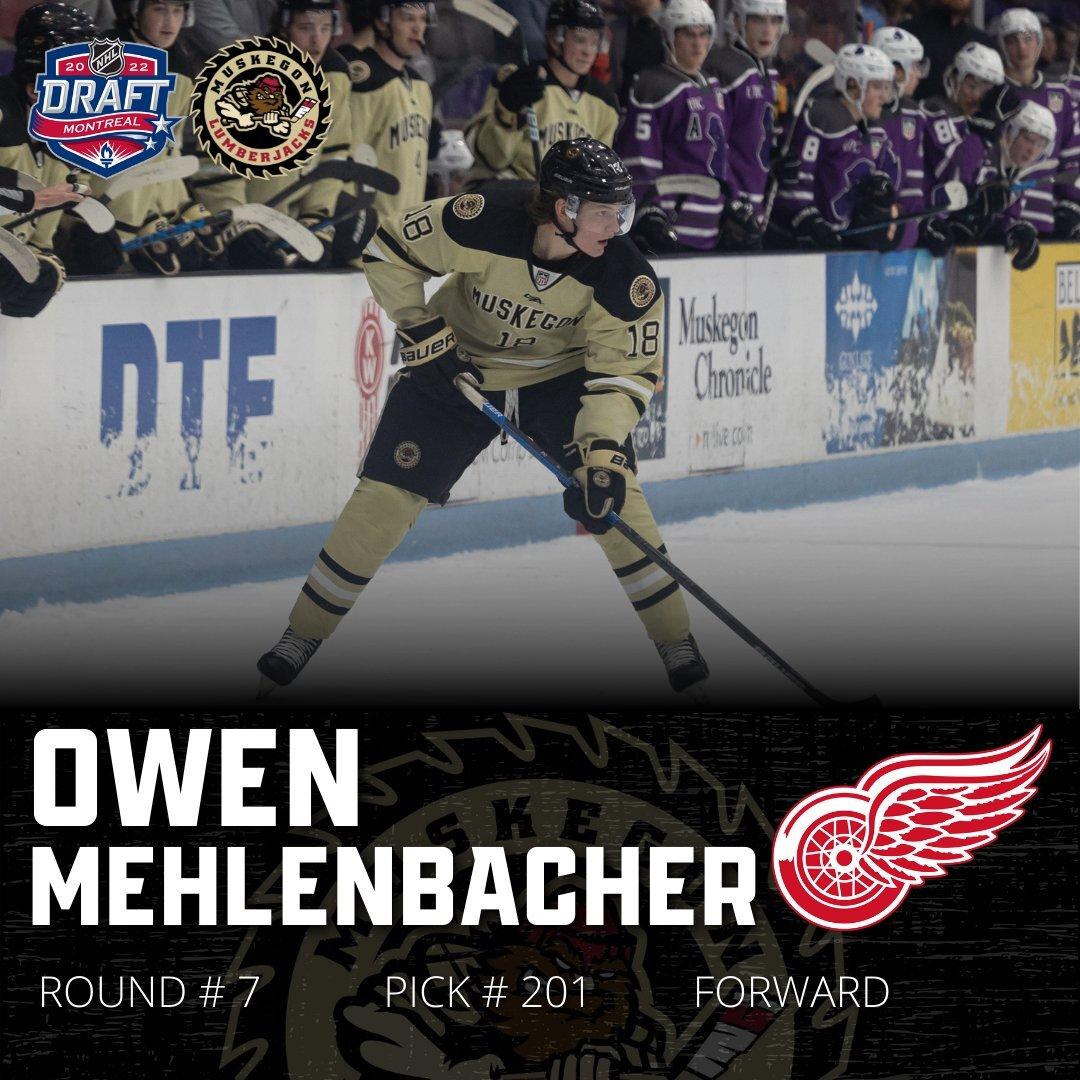 Mehlenbacher, the 6-foot-2, 189-pound forward was taken by the Detroit Red Wings in the seventh round, 201st overall. The Fort Erie, Ontario native played in 56 games with the Lumberjacks during the 2021-22 season, lighting the lamp 17 times and racking up 25 assists for 42 points. Muskegon’s Tender from two years ago saw career highs in goals, assists, and points, scoring 30 additional points from the 2020-21 season. The University of Wisconsin commit was named to the USHL All-Academic Team in 2021-22.

Strinden, the 6-foot-1, 185-pound forward was drafted by the Nashville Predators in the seventh round, 210th overall. The Fargo, N.D. native played in 61 contests with Muskegon during the 2021-22 season – where he donned the ‘A’ as an alternate captain – and scored 25 goals and 32 assists for 57 points. Strinden was selected to Team White in the 2022 BioSteel All-American game alongside fellow teammate and alternate captain Phil Tresca. The University of North Dakota commit was originally drafted by the Lumberjacks in the sixth round, 82nd overall in the 2020 USHL Phase II Draft. 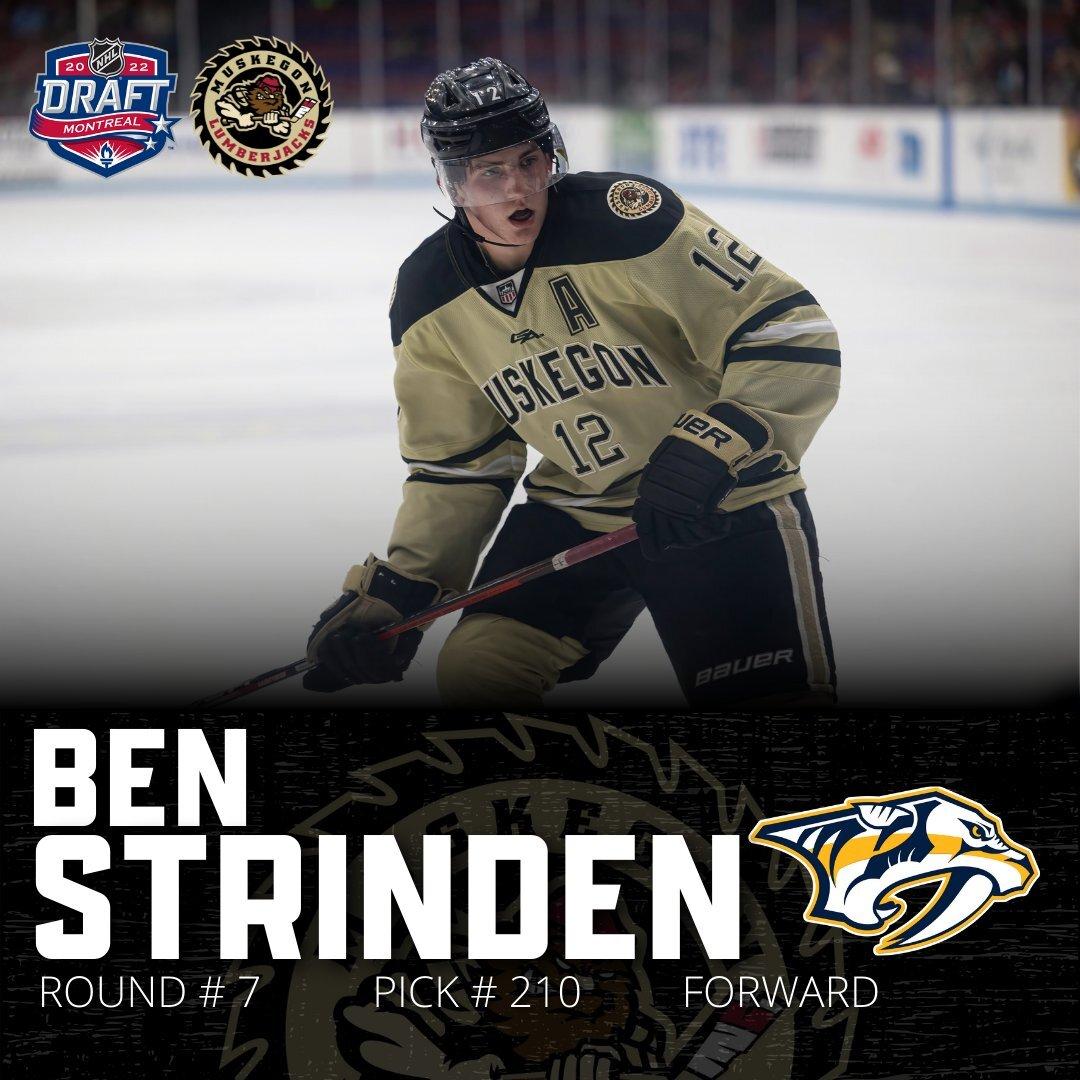 For the 11th consecutive year, the Lumberjacks have had at least one player selected in each of the previous 11 NHL Drafts, including a total of 35 during that span.

To view the full draft coverage on NHL.com, click HERE.

The Muskegon Lumberjacks have announced the 2022-23 regular-season schedule. In total, the season will consist of 62 regular-season contests in a regionally-based schedule. Flannel Fest will make its return on Sept. 30 for Muskegon’s home opener against the Chicago Steel. In all, fans will have the opportunity to witness live Lumberjack hockey 30 times this upcoming year, including 30 unique theme nights for each home game. All home games – with the exception of Dec. 31 – will have a 7:00 pm ET start time from Trinity Health Arena in downtown Muskegon. Single-game tickets, along with the full promotional schedule – including theme nights – will be released at a later date. Season tickets are on sale now. To view the full schedule, click HERE.

Not currently a Lumberjacks season ticket holder? Season tickets for the 2022-23 season are now on sale. For more information, call the Muskegon Lumberjacks Business office at (231)-799-7000 or email afranczek@muskegonlumberjacks.com.