MUSKEGON -- When the nearly $1 million worth of ongoing renovations are complete at L.C. Walker Arena, Mike McCall expects that the 58-year-old venue will be an attractive hangout and social spot for all types.

The Muskegon Lumberjacks' president of business operations, who is in his first year with the organization after 20 years of experience in sales and marketing in the sports and entertainment realms, hopes the new arena layout appeals to everybody: Hardcore hockey fans, sports fans, families and those who are looking for a fun night out.

"The business side, we really made some decisions that we really want to grow the fan base. When you talk about the fan base, it's not just one group of fans," McCall said.

Highlights of the renovation include the following: A pavilion/beer garden in the north to northwest area of the arena; the already-existing Rad Dads' Tacos & Tequila Bar in the northeast corner; an enlarged concourse near the Western Avenue entrance; the addition of executive suites and club-seating areas on the south side of the arena; a Kids Zone in the southwest corner, and party decks in the northwest and southeast corners.

The seating capacity will decrease by a little more than 400. In exchange, more social areas are being created to enhance the experience for an array of spectators.

McCall said that all of the renovated areas at L.C. Walker Arena are expected to be open for the Lumberjacks' 2018-19 home opener Oct. 13 against the Chicago Steel.

"For the first time, (fans are) going to have several options on how to come be a part of hockey and events at the arena. Their only option isn't to just come sit in a seat," McCall said. " ... We're trying to provide areas of community in each area of the arena that will appeal to somebody."

In short, the arena "needed fixing," according to McCall, to make it a much better fan experience.

Continue scrolling to learn more details about the renovated areas.

RELATED: In case you missed it, read about L.C. Walker Arena's plans from city's perspective

WHERE THE MONEY IS COMING FROM

"Those are two budget items that they're working through now," Peterson said.

HOW SEATING CAPACITY WILL BE IMPACTED 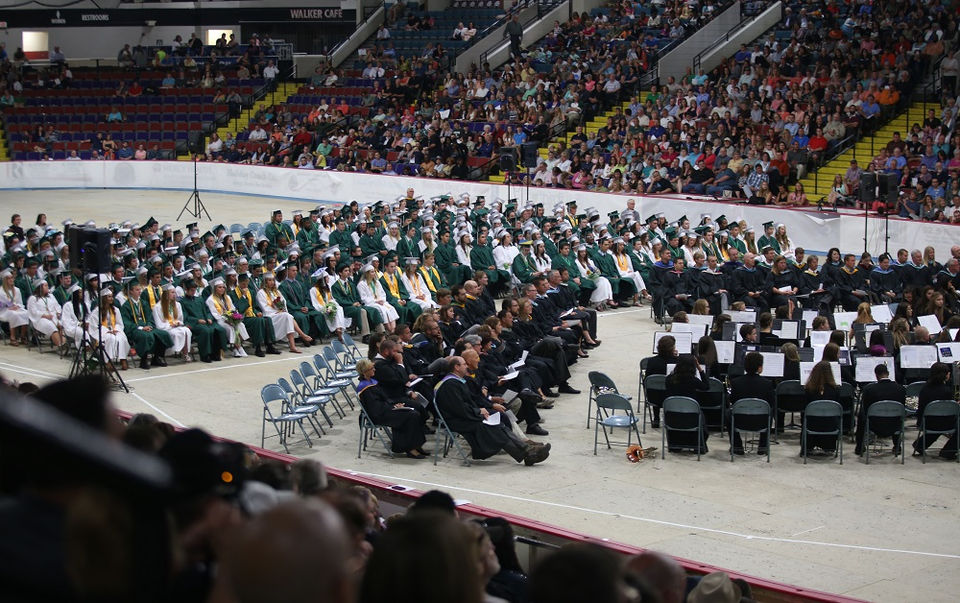 L.C. Walker Arena's original seating capacity has been listed at 5,000 for the hockey configuration, including 4,622 seats and 278 in standing-room-only areas, according to the arena's website.

Concerts could accommodate a total of 6,316, while the seating available for other events such as ice shows and wrestling has been 5,000.

In the renovation, anywhere from 400 to 450 total seats were removed, but McCall said that will not impact the facility's ability to host concerts and other events. The arena has traditionally hosted graduation ceremonies for several local high schools or colleges.

"In fact, (the renovation) will provide new offerings at concerts for suites, party decks and large groups to attend in private areas," he said. "Much more (is available) than just seats."

THIS IS PHASE ONE OF THE RENOVATION

ROSSETTI, which is headquartered in Detroit with an office in Beijing. is the architecture firm handling the L.C. Walker Arena renovation. The project is part of a long-term vision of fully integrating the arena with the fabric of downtown Muskegon and improving the overall guest experience.

The overarching design goal is to create multiple viewing experiences that are social and will be connected to the event. The design borrows concepts trending in event design for larger arenas, but it will be customized to what guests desire in the western Michigan region.

"This is a multi-part deal. (ROSSETTI) is looking at this from the perspective that the convention center gets built, and so this is just phase one in the arena," McCall said. "You'll notice there's no tops on the suites -- those will be part of phase two as that happens, but right now what we've done is make it real user-friendly for all the different facets."

The ongoing work is considered to be part of phase one, designed to transform the seating and concourse areas. The facets include concourse renovation and the addition of executive suites, club area, group ticket areas, party platforms and ADA platforms.

"People crave the ability to gather in different-sized groups and have more choices in personalizing their experience at an event," said Matt Taylor, Director of Sports and Entertainment for ROSSETTI. "Our design follows the trend in larger markets to create a new 'social' concourse where all fans are visually connected to the game while allowing for a variety of seating types.

"People will have the benefit of interacting with friends and family while being a part of the larger event scene. L.C. Walker has great bones and this renovation will bring the guest experience in line with the latest event experiences."

MORE ABOUT ROSSETTI AND ITS WORK

ROSSETTI, which was founded in 1969, is a multi-disciplinary global architecture firm focused on architectural design, urban planning, interiors and graphics.

Projects currently in construction include the Washington Entertainment Sports Area and the Philadelphia 76ers' training facility in Wilmington, Pa., along with the Henry Ford Pistons Performance Center in Detroit.

A few areas of the concourse area will feature 50-inch widescreen TVs and DirecTV.

"Now we'll have the opportunity to show all the big football games, all the college games. ... You get two-for-ones now -- you can be at our game and still watch the best games," McCall said.

MORE ABOUT THE PAVILION/BEER GARDEN AREA 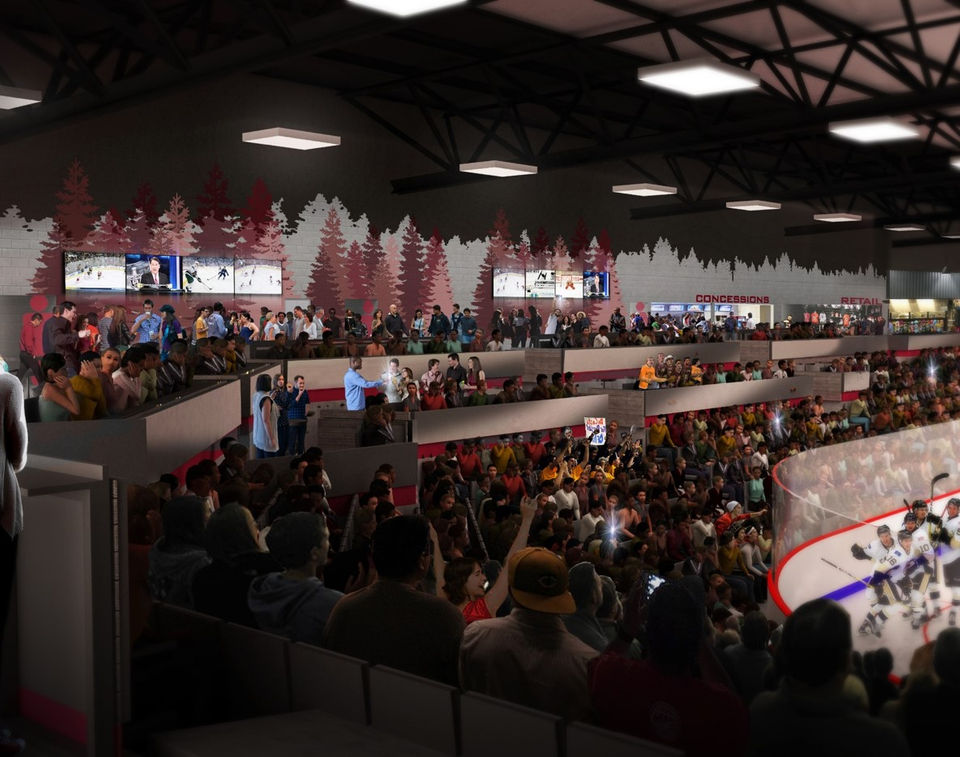 Here is a rendering of the pavilion/beer garden area being constructed at L.C. Walker Arena. (Courtesy of ROSSETTI)

According to McCall, the pavilion/beer garden area located on the north side and northwest corner of the arena will offer fans a social setting similar to a sports bar.

"There's going to be a little mezzanine or loge area in the front with some tables and chairs and we'll sell some of those, but all of those stools and that whole area there is just open. If you buy a ticket to the game, we're really trying to create a community of itself for those that kind of want to party and hang out and drink beer and watch games. So this is almost a bar within an arena, but it's open to where you can still watch the (Lumberjacks) game. It should be a real cool, social environment."

The restaurant, whose specialty is tacos and tequila, opened in May.

CLICK HERE to read MLive's story about the dining, drinking and hangout option, which is located in the northeast corner of the arena.

Here is a rendering of the executive suite area being constructed at L.C. Walker Arena. (Courtesy of ROSSETTI)

MORE ABOUT THE EXECUTIVE SUITES AND CLUB SEATING

Perhaps the most elaborate aspect of the arena's seating and concourse enhancements are the Jacks Club and executive suites going in on the south side of the arena.

"That's what's really new -- new from the standpoint that I don't think that the team has ever had anything like this to market to the community," McCall said.

The Jacks Club will be a private area, enclosed with railing. This will be a season-ticket club, and it will include food and beverages, both non-alcoholic and alcoholic.

"What we have here is, it's set up for entrees, so throughout the night we'll have table tops, tables of two, and then there's bar areas for seating with stools," McCall said. "So you have both the seats, your tickets wherever you bought (them), and then you have the whole area (with the table tops) and it is all enclosed. All your food and beverage is included."

Executive suites will be available for corporate or personal use. Year-round perks include exclusive business events, private family outings and an outing to take in a Red Wings game in Detroit.

"They had some suites here in the past. They called them suites. They were like little boxes. There was no food and beverage, there was no furniture, there were a couple stools. It really wasn't (a nice suite)," McCall said. "These are much larger than they've had. ... These will be nice -- certainly nothing that Muskegon has seen before, not at this arena."

Here is a rendering of the club-seating area being constructed at L.C. Walker Arena. (Courtesy of ROSSETTI)

MORE ABOUT THE PARTY DECKS

(Here is a rendering of one of two party decks being constructed at L.C. Walker Arena. (Courtesy of ROSSETTI)

Two party decks are being constructed, one in the northwest corner and the other in the southeast corner.

The party decks will be available to rent nightly for up to groups of 40.

"People can rent them without any food or beverage, or they can rent them with good entrees -- (offerings) you've never seen here before -- and then beer and wine and sodas and everything. So you can do it either way," McCall said.

"When I've shown that to people that do groups, they're like, 'Wow,' because you don't feed the group of kids or group you're going out with for 10 bucks and do an entertainment thing. We feel we've created the best group outing value in western Michigan."

For the season-ticket holders, McCall said that a new feature is being introduced.

"The one thing we did was we created one thing for them that we thought was kind of a neat thing and that is, first beer is on us -- every game, every night, every ticket," he said. "If you're a season-ticket holder, you come in, you go right to your special place; you get the first beer, that's on us, included in your ticket package." 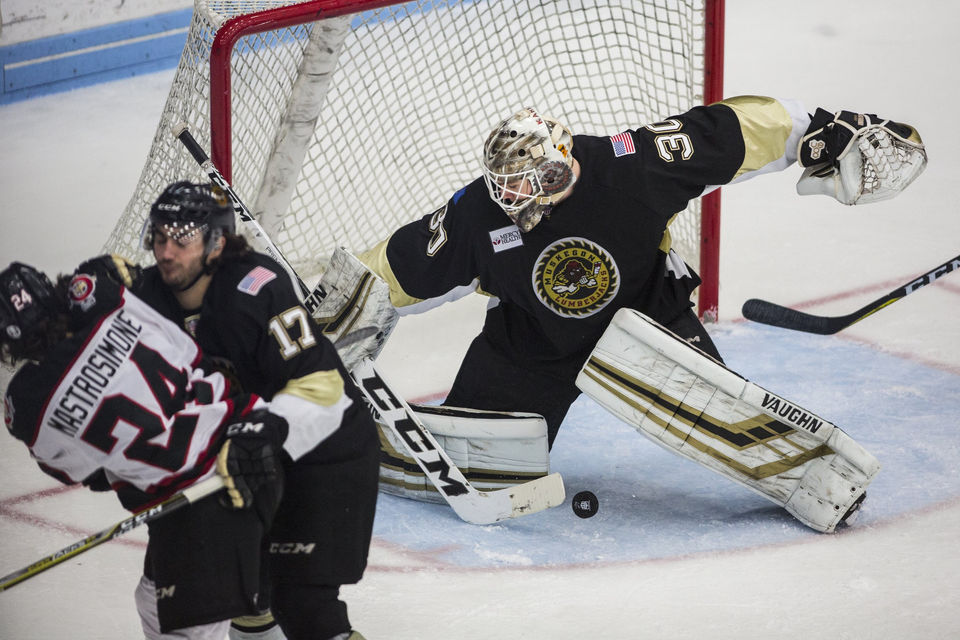 Because of the ongoing construction, only one preseason game will be available to the public, when the Lumberjacks host Team USA at 7:15 p.m. on Saturday, Sept. 22.

Prior to that preseason game, an open house for the public will be held at the arena from 10 a.m. to 3 p.m.